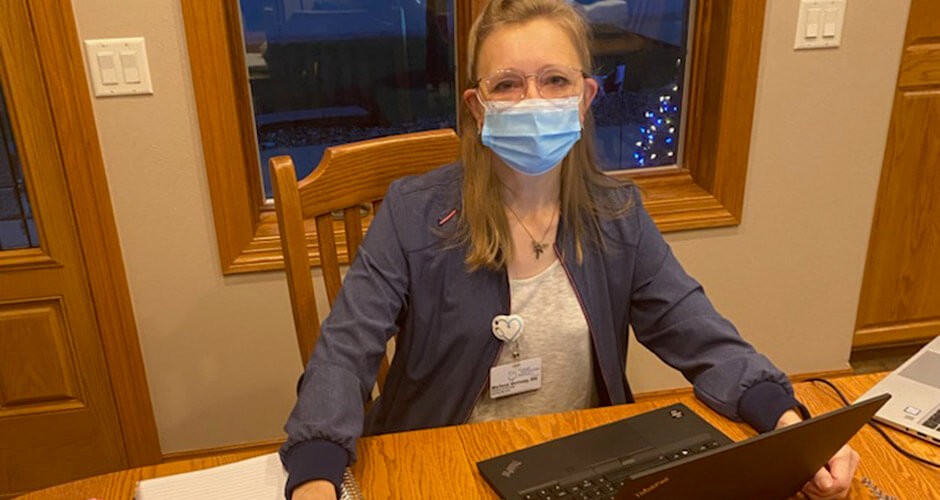 Marlene Quincey’s journey caring for others began long before she received her nursing degree.

When she was 22 years old, Marlene worked the night shift as a certified nursing assistant at a nursing home in Hills, Minn., where her grandma lived.

“I've just always liked working with seniors, and I loved my grandma very much and so it always felt natural,” she says.

After taking some time away to raise her family, Marlene decided to return to her role as a CNA in 2001 and eventually pursue her goal of becoming a registered nurse. In 2010, at the age of 46, she earned her nursing degree from an online program in collaboration with the Good Samaritan Society and the University of South Dakota.

In 2019, Marlene became the director of nursing at Good Samaritan Society – George, but the offer came at a time when she least expected it.

After a car accident left her hospitalized for several weeks, it was during her recovery when she called the center and asked if they had any open positions, which included the director of nursing role.

“I had realized pretty much the minute I left the Good Samaritan Society that I wanted to get back to working with seniors,” she says.

Marlene started off her new job working from the center’s office and slowly began helping on the floor as her recovery allowed.

“On one of my first days back at the nursing home, a lady who didn’t talked very much or recognize very many people saw me walking down the hallway and said, ‘Hi Marlene,’ and I hadn't been there for over a year,” she says. “That was when I just knew I was back where I was supposed to be.”

As a nursing leader, Marlene wanted to take a team-centered approach to caring for residents. Her team includes registered nurses, licensed practical nurses and a growing number of CNA certified high school students.

“To hear our students say, ‘It's no big deal, that's just part of our world,’ when they have to get tested for COVID-19 as part of our safety precautions, is a reflection of what I want our nursing home to be like,” she says. “I want the staff to want to be here and our residents can feel that too.”

Quincey develops strong teamwork among her staff by first setting the example. Earlier this spring when the pandemic began and the center switched from 8-hour nursing shifts to a 12-hour schedule, she took several shifts to help the transition go smoothly.

“I don’t ask my CNAs or nurses to do anything that I wouldn’t do myself,” she says.

And when team members and residents became sick earlier this summer, Marlene and her staff had to be flexible to make sure the center’s needs were met.

“We worked as a tremendous team and it’s amazing how we pulled it all together,” she says.

Although no two days are alike, there is one constant that keeps Marlene dedicated to the nursing profession.

“There isn’t a day that goes by I don’t get some type of love back from the residents,” she says. “Right now, we're not supposed to hug, but a kind word or an elbow bump from our residents in thanks for what we do makes it all worthwhile.”

The World Health Organization has designated 2020 as the International Year of the Nurse and Midwife. This designation honors the 200th anniversary of the birth of Florence Nightingale, the founder of nursing, and recognizes the vital role of nurses around the world. At Sanford Health and the Good Samaritan Society, we honor our nurses’ unique calling, compassion and commitment to patient and resident care.