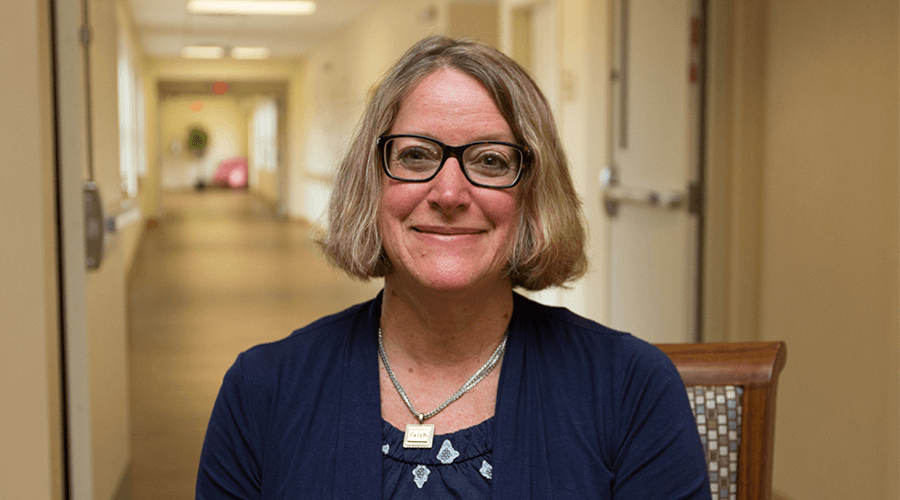 As the campus administrator, Michele is a seasoned veteran. After her first role as a housekeeper, she worked as a nursing assistant for a short time before becoming a housekeeping supervisor. She later served as an apartment manager and then an office manager. While working full-time and raising a family, she also went to school to earn degrees in accounting and health care administration.

Michele grew up in the area and has had several relatives live at Scandia Village. It’s a place that means a lot to her and her immediate family.

“I actually met my spouse here. My kids grew up here. They visited their great-grandparents here,” says Michele. “Both of my daughters went into the health care field.”

Scandia Village celebrated its 40th anniversary in the fall of 2021. Michele and her team spent time reminiscing and celebrating with residents.

Through the decades, Scandia Village grew from a single nursing home with 60 beds to a campus that serves about 150 residents. Besides having a care center, it now includes senior apartments, an assisted living building and twin homes.

Campus residents and staff are very involved in the Sister Bay community. Each Christmas, they adopt a family, collect many boxes of food for local food pantries and support the local children’s center throughout the year.

“Those are the things that make it special,” says Michele. “Everybody works hard to make it a great place that residents are happy to call home. We are one big family, and the family atmosphere can be felt and seen across campus.”

The tight-knit community has supported several projects since the campus opened, including the most recent $8 million dollar capital campaign for a new assisted living building and private rooms for the care center.

“Dedicated auxiliary members and community volunteers work endlessly for the betterment of the campus and the residents who choose to make their home with us. They’ve done some amazing work,” Michele says. “It’s been phenomenal.”

Michele’s roles have allowed her to work with the entire Scandia Village community. She knows the workings of the campus and enjoys getting to know all of her staff members, some who have worked there for over three decades.

“It’s been nice to have different roles and get to know everyone,” she says. “I’m very fortunate to have such a great team that is so dedicated to the residents and are experts in their fields. It’s been so rewarding to interact with and spend time with residents for nearly 40 years.”