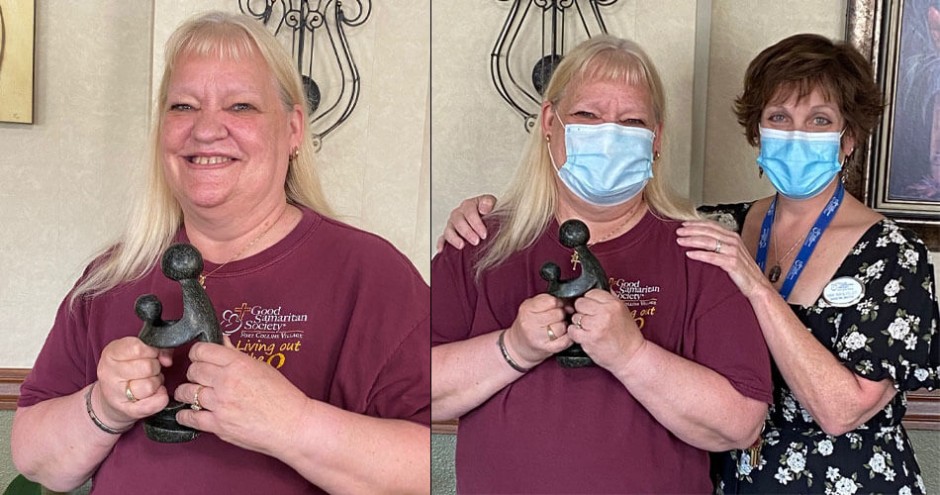 As a night nurse at Good Samaritan Society – Fort Collins Village, Toni Brown feels like it’s her purpose to help residents experience meaningful moments as they near the end of their lives.

“I just really think it’s super important that you go with their wishes,” says Toni. “I call it climbing the ladder to heaven.”

Mimi Wahlfeldt witnessed firsthand the wonderful rapport Toni has with those in her care when her father moved to hospice at Fort Collins Village. His final days were emotional for Mimi, but Toni made them easier.

“Toni was my guiding light through it all,” says Mimi, who is the marketing director at Fort Collins Village. “She was always a reassuring voice, an extremely competent nurse who knew what to do, and she extended grace and compassion to my father and me every step of the way.”

Because of the outstanding care Toni provided her father, Mimi nominated Toni for the Good Samaritan Society’s DAISY Award for Extraordinary Nursing.

“Toni did not ‘just’ provide physical care to my dad’s body. She served his emotional and spiritual needs as well – and mine,” Mimi says. “I am so grateful she was working the three nights I was there and needed an angel by my side.”

Toni says she was shocked when presented with the award by Administrator Fred Pitzl and Director of Nursing Kerry Macfarlane.

“It’s been a high honor,” says Toni. “I really, really am blessed.”

A life of caring

After working as a certified nursing assistant (CNA) for 25 years in a hospital setting, Toni knew she wanted to take care of seniors. In 2012, she received her nursing license and began working at Fort Collins Village two years later. Toni has held several roles there, but her favorite has been working the night shift.

“I’ve been working the night shift for four years,” Toni says. “I truly wish I had done it sooner.”

She says the night shift is great because she can spend a lot of quality time with the 50 or so residents in her care.

Whatever shift she’s worked, Toni is thankful for the organization’s Lutheran mission.

Toni loves her job so much that she encouraged her twin sister, Terri, to work there, too. Terri began working as a CNA on the day shift four years ago. The identical twins sometimes get mistaken for each other.

When asked what she likes most about her work, Toni says, “Residents need to have the fullest life they can before they go and that’s what I’m there for. I love it.”