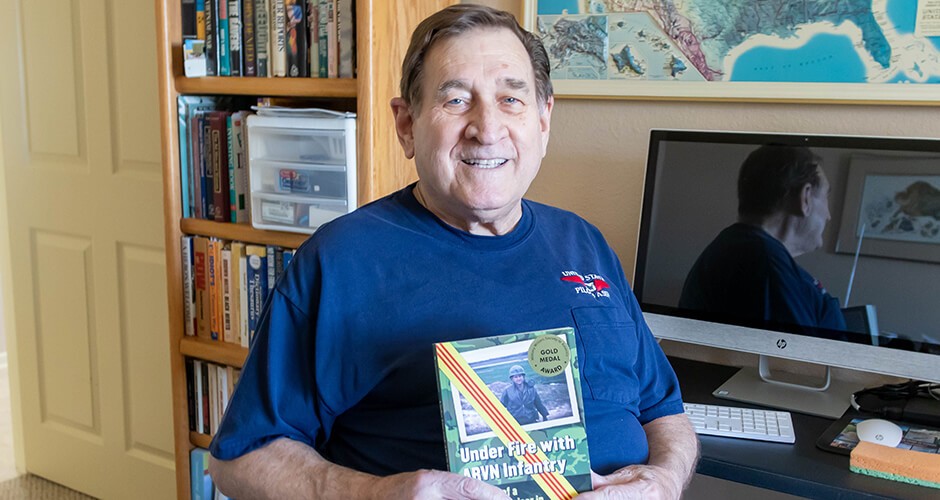 Bob Worthington, a professional writer, is taking home a Gold Medal for Excellence in Literature for his book, "Under Fire with ARVN Infantry." The Military Writers Society of America is handing out the award.

The book chronicles Worthington’s first tour in Vietnam as a combat advisor to Vietnamese infantry units.

“I lived with them. I ate with them. I fought with them. Got to meet their families, play with their kids. My time in Vietnam was not as most people see the history of Vietnam today,” Worthington said.

During his time in what he calls a “beautiful country” with “beautiful people,” the 83-year-old says he felt safer when he was with Vietnamese troops.

Worthington retired as a lieutenant colonel after 15 years in the infantry and a decade as an important Army clinical psychologist.

“In this position, I was able to become involved in many different major programs involving psychology in both the Army and the Department of Defense,” Worthington said.

He was one of the pioneer researchers in post-traumatic stress disorder.

“One thing that made my role easier is I was a highly decorated combat officer,” Worthington said. “When I would go as a consultant to combat units, they could see that I used to be one of them.”

Worthington’s military awards include seven decorations for valor, the Purple Heart and several others. His daughter and two grandchildren are also honoring his service by following in his military footsteps.

“I feel very proud that I have a daughter and grandchildren who also share an interest in the military,” Worthington said.

With a granddaughter who is a West Point graduate and a grandson who went to the Air Force Academy, his family is creating quite the legacy.

Future writing awards could be ahead. Bob is working on his next book detailing his second combat tour in Vietnam. It’s due in 2021.

He’ll finish it up from his apartment at the Society in Las Cruces. It's where he lives with his wife Anita.

“Living here, we love it. I think it was an excellent decision,” Worthington said.

The two moved in just days before the pandemic hit. Life at the Society is different than what he was expecting due to COVID-19 safety procedures. Still, he’s enjoying his new home very much despite restrictions on social gatherings.

“It’s quite a bit different than it was designed to be but the food is excellent. The staff are extremely nice,” Worthington said.