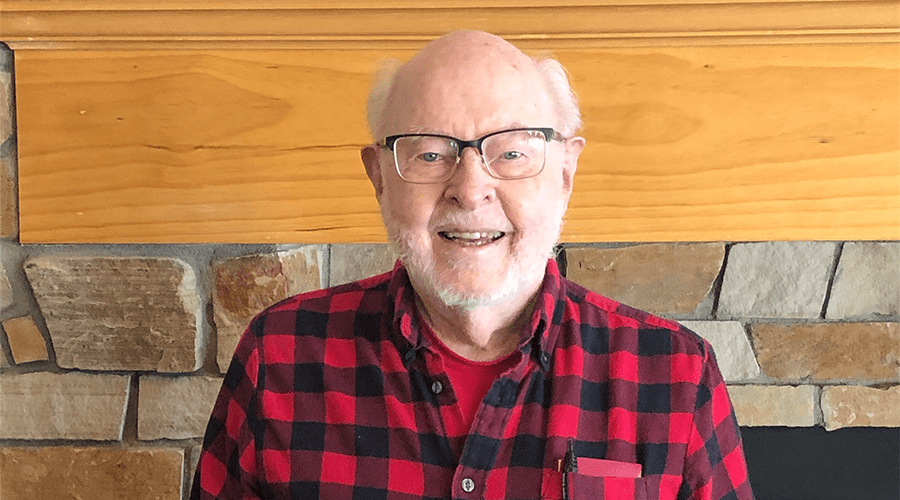 Roger Fjeld would gladly sit and talk history with you. After all, it’s what he’s spent most of his 88 years thinking about and studying.

Roger is an Iowa farm kid, a 1959 graduate of Wartburg Theological Seminary in Dubuque, IA, and the holder of both a master’s degree in Reformation and Renaissance history and a doctorate in American intellectual history from the University of Colorado Boulder.

He’s a former faculty member and president of Wartburg, as well, serving in the latter role from 1983 to 1999—a time of great change for Lutheranism at large in the United States.

In fact, while president of the seminary, Roger was an observer at the Evangelical Lutheran Church of America (ELCA) Constituting Convention in 1987, where three separate church bodies merged to become the largest Lutheran denomination in the U.S. Despite the shrinking number of Lutheran seminaries nationwide during this period, Wartburg, with Roger at the helm, remained as one of seven institutions producing pastors for the ELCA.

When he retired in 1999, Roger and his wife, Marilyn, moved from Dubuque to their vacation condo in Estes Park, CO. Not long after the move, their future home—Good Samaritan Society—began to establish roots in the community.

As a reverend and church historian, it would make sense for Roger to take some interest in the story of the Evangelical Lutheran Good Samaritan Society and its founder, Reverend August “Dad” Hoeger. But for several reasons, Roger’s interest goes beyond key dates and names.

For one, he and August share an alma mater. During his time as Wartburg’s president, Roger researched the Rev. Hoeger, a 1908 graduate, and tracked the growth of Good Samaritan Society as it spread across the U.S.

Not only that, but Roger’s father-in-law, William Burrack, knew August personally and told stories of the man and his work. The two were pastors in the same part of North Dakota when the Rev. Hoeger began shifting his focus from primary pastoral responsibilities—things like preaching, baptizing and marrying—to his work in the social, service-oriented ministry that would become the ethical and practical foundations of the Good Samaritan Society.

With existing ties to the organization and its founder, it’s no wonder that Roger and Marilyn Fjeld decided to make Good Samaritan Society – Estes Park their post-retirement home 19 years ago. It’s not surprising, either, that the couple was active in helping the Society overcome some resistance from outside community members on the way to becoming the first residents of the new facility.

Roger and Marilyn were at the town board meeting where a room full of locals debated the merits of building a senior living community in the scenic Rocky Mountain town.

“There's a very wealthy neighborhood north of us here that wanted to keep us out,” Roger said. “[Marilyn and I] were just two of many people who knew Good Samaritan Society’s reputation and wanted it here.”

In the end, the town board voted unanimously in favor of the new community, and Roger and Marilyn moved into their new twin home on the Good Samaritan Society – Estes Park campus as soon as it was up and running.

Once settled in, the Fjelds got involved in the construction of a church adjacent to the village. The existing congregation was worshipping in rented space, so the couple, with Roger’s church leadership experience at hand, helped give Shepherd of the Mountains Lutheran Church a new face. Good Samaritan Society sold the land to the church when it finally had the money to build.

“I was involved in some of the fundraising, and my wife became the parish secretary, operating out of our twin home because there was no church,” Roger said. “We just had a ball being involved in that.”

As a 19-year resident, Roger has spent more time at Good Samaritan Society – Estes Park than any other resident or staff member. He lost Marilyn in 2018—in their 63rd year of marriage—and now lives alone.

Roger remembers feeling validated in his and Marilyn’s decision to retire with Good Samaritan Society, especially when her physical health started to fail.

“When we first moved in, we really wanted to be part of a community, and we knew that our church was going to be built right here too,” Roger said. “As the years went on, we were increasingly grateful that we had made the decision.”

Marilyn eventually moved to an assisted living unit to accommodate her growing medical needs. She used a power chair to join Roger and a crew of friends for meals in the main dining room—a routine they’d kept up for years. On nice days, she would visit Roger in the twin home.

“Good Samaritan was so flexible to us,” Roger said. “They’re not in the business just to make money, so they’re willing to figure out how to accommodate people.”

Today, Roger finds joy in little things—for instance, that he and his fellow residents can socialize again thanks to vaccines. For the first year of the pandemic, contact among residents and staff was at an absolute minimum to curb the threat of COVID-19.

“Good Samaritan, and I hope other places, took a strict stand on our exposure,” Roger said. “And they got us vaccinated as soon as possible.”

He went on: “We’re being careful now. We’re back in the dining room, and we can have company as long as they’re vaccinated.”

Besides fellowship, Roger stays busy watching sports—he likes the Green Bay Packers and the Denver Broncos—as well as keeping up with his alma mater and former employer.

“I’m still in touch with the seminary, but I’m glad I’m retired instead of figuring out how to educate in the middle of [the pandemic],” he said. “I can tell you how to milk a Holstein or start a John Deere tractor, but when it comes to technology, I’m hopeless.”