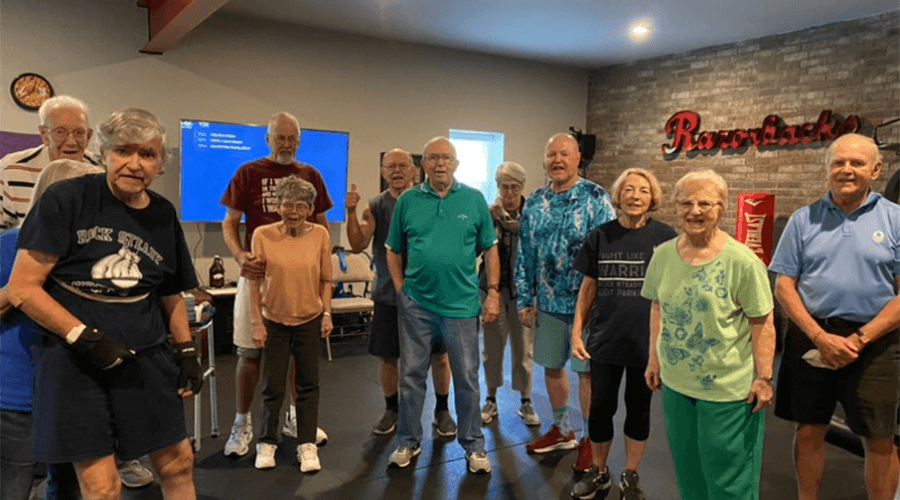 Each week, participants put on boxing gloves for these force-intense, non-contact exercise classes.

Parkinson’s disease is a neurodegenerative disorder that affects a person’s ability to move. The progression of symptoms varies and there is no cure, but treatment options are available.

“The number one thing for any person who has Parkinson’s is exercise,” says Misty Richens, fitness supervisor and Rock Steady Boxing instructor at Hot Springs Village. “The program works because it helps move the dopamine that the Parkinson’s patients are lacking to parts of the body where they need it more.”

Phil Schlachtenhaufen, who has been attending the class for over three years, likes everything about it, including the camaraderie, the support and the instruction.

“The exercise part is really helpful,” Phil says. “It’s attuned to what Parkinson’s people need. We need to continue exercising so we don’t ‘freeze up.’ If you’re taking small steps and not picking up your feet when walking, your legs will lock and you’ll fall.”

Each class helps participants gain the strength, balance and endurance they need to better manage their Parkinson’s symptoms.

During the first part of the class, participants rotate to different stations and do short boxing routines. They also work on building their endurance and lung capacity by speaking loudly throughout the class.

After the boxing portion is over, Misty leads the class through core strengthening, stretching and flexibility exercises. Then every class ends with a chant.

“Everyone puts a hand in the middle and says ‘1, 2, 3 rock steady, every muscle, every way, every day,” says Misty.

Gordon Wilson, a senior living resident at Hot Springs Village, has attended classes for about a year and appreciates the confidence he’s gained.

“Just the fact that you’re able to try certain movements and functions gives you a little more confidence than what you’d normally have,” he says. “With a little exercise, you’re doing more than what you thought you were capable of doing.”

Misty also helps participants improve their cognitive skills with activities like crossword puzzles and board games. She makes sure they stay up to date on the latest Parkinson’s news by handing out articles.

“I have seen so many people benefit from Rock Steady Boxing,” Misty says. “They’re able to do things we thought they’d never be able to do.”