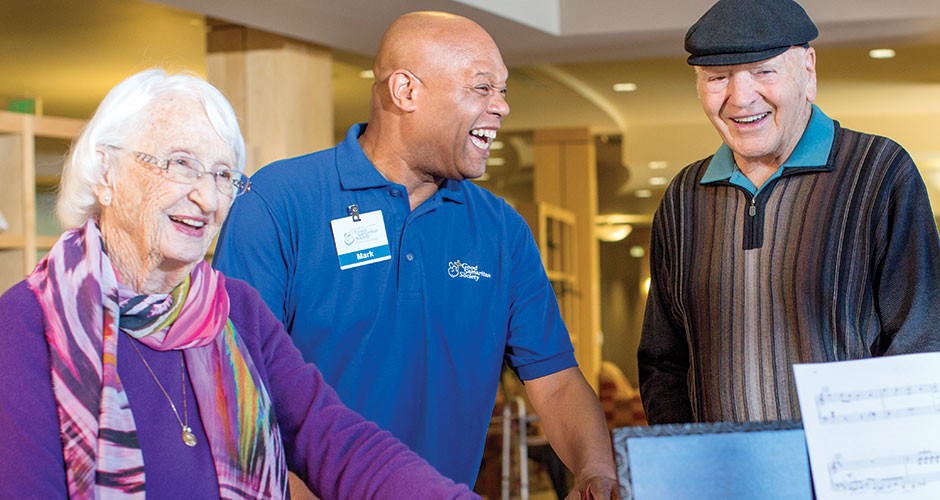 Over the past 40 years, Good Samaritan Society – Prescott Village and Prescott Valley in Arizona have touched more than 60,000 lives. Seniors and their families know they can count on receiving quality, compassionate care.

Cal Cordes, 92, has been volunteering for more than 30 years at Good Samaritan Society – Prescott Village.

He began in 1987 after stopping by Prescott Village to visit a friend.

“I saw John and Helen Busse and Ethel Lytle in the lobby, and Ethel said, ‘Cal, we could really use your help. We just lost our driver. Could you volunteer to drive us to appointments?’ I said yes, and the rest is history," says Cal.

Five years ago, Cal became a resident at Good Samaritan Society – Prescott Village. He continues volunteering to this day. You can find him most days socializing with new neighbors, playing cards and calling bingo.

When asked about his secret to longevity, he replies with a simple formula: “Stay active.”

Cal still bowls on a league and is the president of the Mile Hi Horseshoe Club. In addition to his volunteer work, Cal keeps up with his large family — he has 30 grandchildren and 19 great-grandchildren.

Like Cal and the other volunteers featured here, you can make a difference in the lives of residents at Good Samaritan Society – Prescott Village.

Pat Trout's mother, Irene McDole, used nearly every one of the services that the Good Samaritan Society has to offer in Prescott.

“Through all the years, the transitions from place to place within the Good Samaritan Society were smooth,” says Pat. “Continuity was the thread that wove through her later years, and for that I am so thankful.”

Paula Kneisl, retired executive director of Good Samaritan Society – Prescott Village, says she was drawn to the Prescott area because of the opportunities to serve.

“We brought the campuses and services together so that even though we were on different sites, we were all part of the Good Samaritan Society continuum of care in the Quad Cities,” says Paula.

During her tenure, Kneisl oversaw the addition of assisted living at Willow Wind and senior apartments at Prescott Valley.

She says her proudest moment was adding certified home health and hospice agencies, including a free-standing Medicare-certified hospice house, named Marley House, which opened in 2010.

Marvin Bailey, a Prescott Village resident for nearly four years, not only ensured the Good Samaritan Society's future through a $250,000 gift to their endowment, but he also left a story that continues to inspire.

Marvin battled cancer. But he didn’t want to talk about that. He wanted to talk about love — his love for Wava Stoll, her family, his neighbors, staff, volunteers and friends at Prescott Village.

Wava and Marvin met shortly after Marvin’s wife, Evelyn, died. Wava was a widow and also lived at Prescott Village. They found love and shared a deep faith and love for friends and family.

For 17 months, Marvin received hospice services, and together, he and Wava developed friendships with the staff and care team. He passed away on Oct. 30, 2017.

Marvin's endowment gift will continue to bless the residents and staff at Prescott Village for years to come.

As a hospice volunteer at Good Samaritan Society – Marley House, Sonia Clarke is there to support and assist patients who are nearing the end of life and their caregivers and family members.

Sonia is there to listen, comfort and provide care. She also provides companionship, socialization and respite for family members so they can take breaks to run errands, grab a meal or go to appointments.

Sonia and the other hospice volunteers give many hugs, hold hands, pray with families, play instruments, cook meals and, ultimately, become part of the person's family as they make lasting friendships with surviving family members.

"We encourage a hospice patient to tell their life story and express their feelings," Sonia says. "We've cried with families, said many goodbyes, mourned for the deceased and attended memorials."

When they're ready, hospice volunteers take another assignment so that they can be a blessing to another family.

"The greatest gift I can give is to be present," says Sonia.

More than 40 years ago, Jean Phillips was asked by her pastor to join the fundraising committee for Prescott Village.

"I understood the need for a Christian nursing home and senior living for our community," says Jean, now 95.

It was the biggest fundraising venture in Prescott's history, and it needed the community's support.

Jean enlisted the support of friends Ethel Lytle, Charlotte Flahive and Marie Mills, and they began walking door to door to help raise money. The community responded, and ground was broken for the campus in 1977.

In addition to fundraising, Jean also founded the Village store in 1979 and volunteered there until 1989.

"It was a grand retail store with everything a resident might need," says Jean. "People from the community shopped there, too."

Jean also founded the Village Women's Auxiliary and did various volunteer work for about 20 years.

She says the community was fortunate to have the Good Samaritan Society come to Prescott, and she's thankful that senior services there have continued to grow.