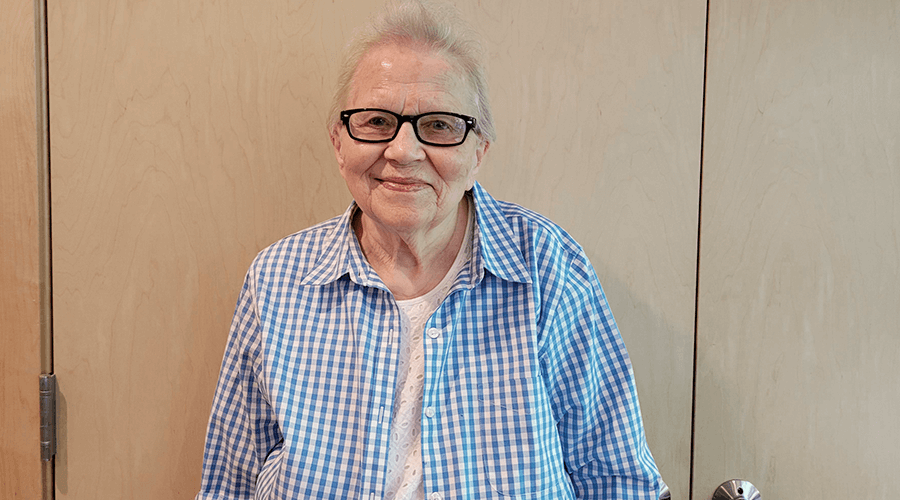 In the decades since Marian Johnson worked for the Good Samaritan Society in St. James, Minnesota, she still has fond memories of her time there.

And even though the 89-year-old eventually moved from the community and later to the Twin Cities, she knew that she wanted to live in a Society location if she had the opportunity.

“I told my children that if I lived long enough to be in a facility I would like very much to be at a Good Samaritan Society facility, and here I am at The Lodge of New Hope,” says Marian. “I moved to this area to be near my daughters.”

When Marian first discovered the Society in 1974, she wasn’t sure if a job in long-term care was for her, but her curiosity led her to answer an ad for a nursing job.

Marian had always worked in a hospital setting, but when she and her family moved to St. James, Minnesota, it seemed like the right time to make a change.

“I was very hesitant as I didn’t know if I would fit into a long-term care setting,” says Marian. “I was hired and my, how my attitude changed. I really loved working with the residents. They had so many changes and adjustments to make and I liked to help them in any way that I could. I felt that in many ways they taught me so much.”

After 10 years in that role, Marian had the opportunity to become the activities director.

She enjoyed the role and working alongside her assistant, Karen Haler. They played card games and bingo with the residents, had discussion time, did crafts and made lefse.

They also took residents out to eat, to parades and on bicycle rides using a three-wheeled bicycle with a seat on the front.

“There was no end to what we could do in that department,” states Marian.

She appreciated the wisdom of residents and the ability to work for a faith-based organization.

“To be able to go to work and hear God’s word spoken, prayer offered and to join in prayer with the residents was a true blessing,” she says.

In June of 2020, Marian moved to assisted living at The Lodge. Although she couldn’t see her children and grandchildren for the first few months due to the pandemic, she kept busy with hobbies and activities that she continues to pursue today.

“I walk three times a day outdoors if it’s not too hot, otherwise I walk the long hall. It’s my exercise,” she says.

One of her other favorite hobbies is reading. Marian can often be found in the Lodge’s library, which has an array of books. She also frequently borrows books from the local public library and reads each night before bed.

“I can order books, they’ll mail them and I mail them back all at no cost,” says Marian. “I like mystery books, autobiographies and kind of a variety.”

She also likes watching TV shows and movies in her apartment and enjoys spending time in the Lodge’s outdoor area and on the spacious second-floor porch. Marian is a regular participant in the weekly Bible study and church service.

“I so appreciate that we have weekly worship services as well as the kindness and caring of the staff who truly carry out the original mission statement of Good Samaritan, ‘In Christ’s Love, Everyone Is Someone,’” she says.

When she’s not at the Lodge, she spends time with family members playing bingo at the legion or shopping at thrift stores, where the one thing she can’t pass up buying is books.

Marian likes the services she receives as a resident – including having her apartment cleaned, meals provided and vital checks by a nurse.

She says one of the benefits of living there is that it’s small enough that it allows her to get to know her neighbors.

“I just feel comfortable here,” Marian states. “The food is really good. They have homemade soup.”