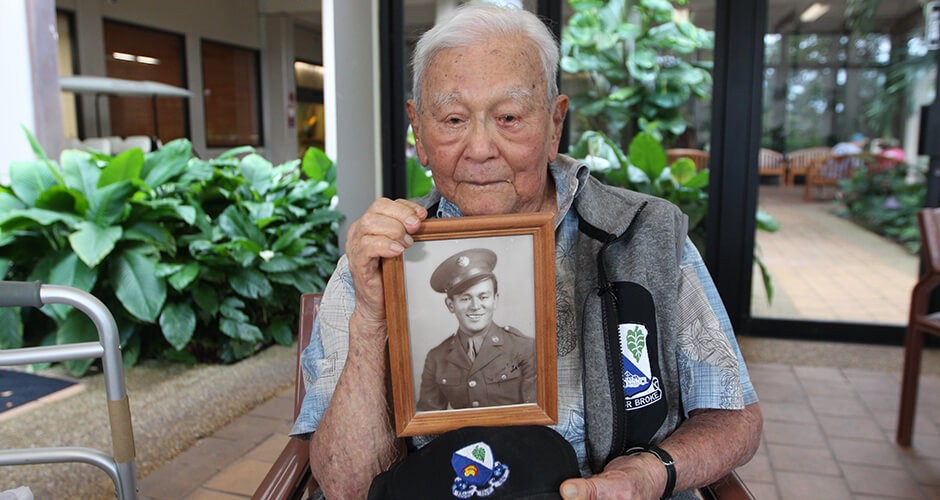 Veterans are incredibly important at the Good Samaritan Society. Each one has his or her own story to tell. We are here to listen and provide support.

World War II vet Jack Nakamura lives at Good Samaritan Society – Pohai Nani in Kaneohe, Hawaii. Before the 97-year-old enlisted in the Army in 1941, Jack was a Japanese American living in Hawaii. He remembers, vividly, the attack on Pearl Harbor.

“I saw a maneuver. So, I climbed up the roof. My roof. I looked, like that, and all of a sudden, pop, pop, pop. What are you shooting at me for?” Jack says.

Everything changed for Jack and the country after that. Jack stepped up and volunteered to fight.

“When they asked for volunteers to go to war, I put up my hand,” Jack says.

Little did he know how hard the next few years would be.

“It was a pretty tough, tough war,” Jack says. “I almost died four or five times.”

Jack served in France, Italy and Germany with the Army. He has two purple hearts and got out as a sergeant in 1945. Jack thinks often about how blessed he was to survive the war.

“A bomb fell next to my head and didn’t explode. Wow!” Jack says.

In addition to the two purple hearts, Jack has a Congressional gold medal. He was also inducted into the Legion of Honor by France. It is the highest decoration handed out in France. Many American veterans who risked their lives during World War II fighting in France qualify as knights of the Legion of Honor.

Still, he does not wish for war. His message to younger generations is to avoid military conflict at all costs. The price is too high.

“If you don’t kill him, he’ll kill you. What a situation,” Jack says.

Jack now enjoys a better situation. You can find him mingling with others and singing songs at the Good Samaritan Society. He says staff and fellow residents treat him with honor and respect because of his military service.

“They thank me. Everybody is so friendly and so thankful. I feel so happy,” Jack says.