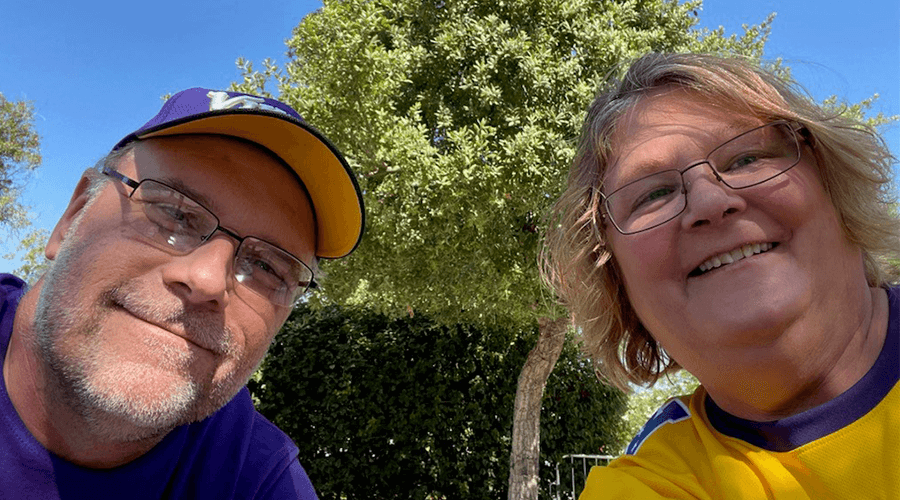 Gail Dierks is no stranger to COVID-19 and how devastating the virus can be. So, when she tested positive, the Good Samaritan Society nursing and clinical services consultant based in Iowa was worried.

“I literally cried because I’ve seen the front lines. I’ve helped take care of residents and I was scared,” Gail says.

The 56-year-old’s fears were realized when she came down with severe symptoms a few days after returning from a Minnesota Vikings football game in Arizona. Gail is fully vaccinated.

“What made it worse is the Vikings lost that game,” Gail says recalling a missed Vikings field goal at the end of the game.

She suspects she contracted the virus during the long-awaited vacation despite masking in public and distancing where possible.

Going to a Vikings away game is a yearly tradition she shares with her husband Dave. The couple skipped a trip last year because of the pandemic.

She remembers joking with Dave after the defeat this September.

“‘Now watch, they lost the game, we’re going to go home and get COVID.’ Two days later we got COVID,” Gail says.

'Can't get rid of headache'

Her initial symptoms began on Sept. 22 and grew worse the next day. The registered nurse tested positive for COVID-19 the morning of Sept. 24.

She’s grateful to finally be back on the job after missing three weeks.

“I have good days and bad days. It’s going to take me a while to fully recover I think,” Gail says.

Her oxygen saturation levels were in the mid- to high-80s.

“I can’t get rid of the headache, and if I talk too much or walk too much, I start having coughing spells,” Gail says.

During the illness, she wasn’t eating or sleeping well and had a hard time breathing.

“I was just very cold, and I hurt all over. My whole body hurt. Coughing terrible. I felt foggy,” Gail says.

A chest X-ray showed she also had pneumonia.

“I was so scared I was going to end up in the ICU, intubated, and that’s kind of a downhill slide when that happens,” Gail says.

'Lucky I had the vaccine'

Gail and her husband received monoclonal antibody infusions. She remembers barely being able to sit up during the process. Dave had few to no symptoms.

“I really felt like I was lucky I had the vaccine. I know as a nurse and everything I saw over the last year and a half, I know I would have been in the hospital had I not been vaccinated,” Gail says.

Confident her COVID-19 vaccine made a difference, she’s urging others to get the shot.

“It was a long haul,” Gail says. “(COVID-19) is real. People are going to continue to die until we’re all willing to step up for ourselves and our fellow man and do the right thing for everybody.”