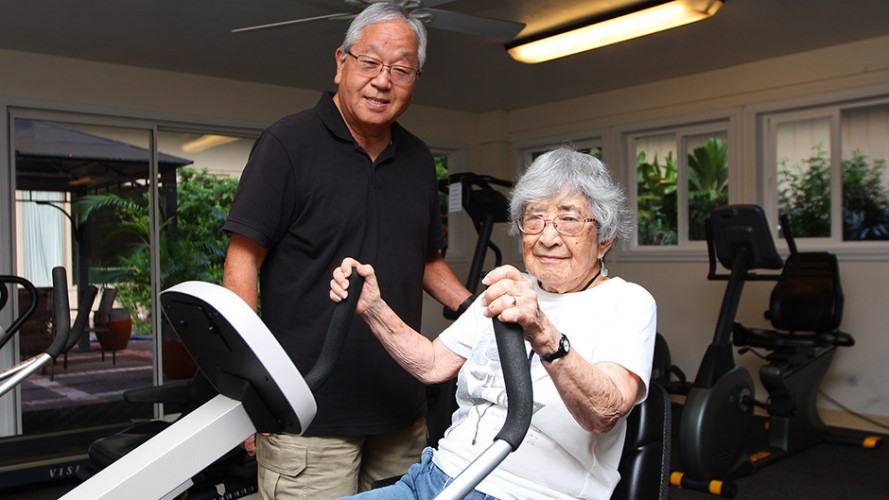 'It keeps me and my body in good shape': Watch Janet Nakashima work out in Good Samaritan Society – Pohai Nani's wellness center in the video above.

Even at age 97, Janet Nakashima’s ohana isn’t cutting her any slack.

Ohana is Hawaiian for family, and Janet’s children worried she was a little too comfortable. “We were finding that she was getting a little lazy,” her son-in-law, Randy Kimura, says.

A resident of Good Samaritan Society – Pohai Nani in Kaneohe, Hawaii, since 2011, Janet admits to slowing down. After all, Pohai Nani means “surrounded by beauty,” and she had settled nicely into her tropical retirement surroundings.

Janet may have been able to ignore those closest to her. But when Judy Knutson, Pohai Nani wellness director, told her she needed to exercise more often, Janet got to work.

Keeping moving is something we encourage all of our residents to do.” – Judy Knutson, Good Samaritan Society – Pohai Nani wellness director

That was almost three years ago. Today, Janet is in the gym three days a week, and it’s her ohana that continues to hold her accountable. Randy is there to help with the machines and coach her along the way.

“I asked if she needed some assistance,” Randy says. “Now she calls me her personal trainer.”

A couple years ago, a flight of steps would have been a hurdle, but now Janet gets up and down on her own. “Me and my body are in good shape and I'm doing pretty well for my age,” she says.

Janet’s physical fitness isn’t the only thing that has been strengthened since Randy became her workout buddy. The bond between the two has grown and brought the whole family closer together. Randy says the clear sense of ohana at Pohai Nani has helped.

“The word that comes to mind is home,” he says of Pohai Nani. “When you relocate from your regular home, you would hope that, when Mom comes, it becomes her home too. And that's what it has become. Her home.”

I call Pohai Nani home because it's home for me. The residents are very friendly and warm and the staff is just right there. They know what you need before you know it." — Janet Nakashima, Good Samaritan Society – Pohai Nani resident

From family gatherings in her apartment overlooking the ocean and mountains, to taking her grandchildren for an afternoon swim at the pool, Janet and her ohana have claimed Pohai Nani as their refuge.

“It’s not only Mom’s home, it’s theirs too,” Randy says of his family. “They’ve taken ownership of coming here and partnering with her in her life. We bring the family and it makes her happy. When we come, it's a whole bunch of us.”

Fitness and family are key to Janet’s well-being. “You can enjoy life a lot more if you're in good shape,” she says.

Improve your well-being by finding your own Good Samaritan Society family.