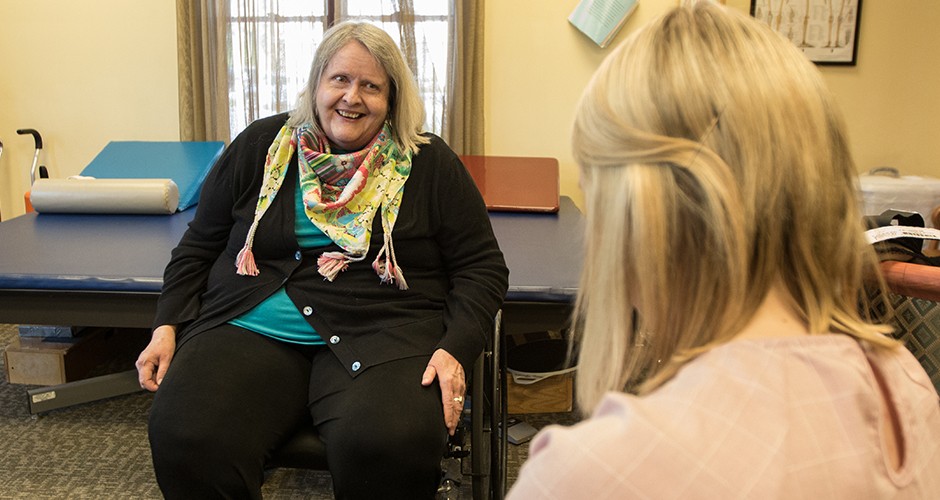 Rehab therapy: Living proof of the healing we provide [video]

In the video above, Meribeth Arndt talks about the care and healing she received during two separate stays at Good Samaritan Society – Ambassador.

Meribeth Arndt says she felt like she had a mountain to move. She was still recovering from a major surgery when the medical van she was riding in was broadsided, leaving her body shattered. The therapy team at Good Samaritan Society – Ambassador in New Hope, Minnesota, had helped her recover from her surgery. She prayed they could help her recover again.

It was just so wonderful to be back in this warm, caring environment.” – Meribeth Arndt, Good Samaritan Society – Ambassador post-acute rehabilitation client

After the accident, Meribeth was hospitalized with internal injuries, as well as three broken vertebrae and a broken arm, leg and ribs.

Once it was time to recover, Meribeth was brought back to Ambassador.

“It was just so wonderful to be back in this warm, caring environment,” she says.

“The nursing care I received was extremely personalized, individualized. They were respectful and warm and encouraging.”

Ambassador physical therapist Cassie Heil and her team had helped Meribeth after her surgery, but when she arrived following the accident, Cassie says helping Meribeth move her mountain was going to take time.

Not sure what kind of therapy you need?

Recovery started slowly, sometimes requiring two people using a lift to get Meribeth to sit up on the edge of the bed.

With hard work and a positive attitude, Meribeth started to heal.

“You have to have the attitude of pushing through and working hard,” Cassie says.

“Meribeth is the perfect example of what you want in a patient, because anything we asked her to do, she was more than willing to do. Each time we hit a small goal we'd say, 'Okay, now here's the next goal we're going to hit.’”

For Meribeth, recovery at Ambassador was more than physical — it was psychological, too.

She felt like everyone was there to help her. “All of the rest of the staff here would stop by to see me," she says. “That provided good psychological support for me.”

One of the first to visit Meribeth was Ambassador chaplain Angel Scott.

The two had many conversations during Meribeth’s stay.

It was during one of those chats that Meribeth mentioned her father was a pastor, and that she’d like to honor his work in some way.

“I’d really like to volunteer at Ambassador,” Meribeth told Angel.

Meribeth is back living at home, but still spends time each week volunteering at Ambassador.

She often answers questions for those coming in with their own mountains to move. She also serves on the center’s advisory board.

“Her ministry has really exemplified what a Good Samaritan is about,” Angel says. “The way that we care — not only for our residents, but also for our staff.”

Watch the video below to hear Meribeth talk about why she volunteers at the Good Samaritan Society – Ambassador.

For the staff, Angel says, it deepens their calling when they see somebody that they've served come back and become part of the team.

“She sees her volunteering as being a part of giving to other people and living for other people. She is living proof of the healing that we provide here.”

With more than 200 locations, we've got a warm, caring place for you to recover