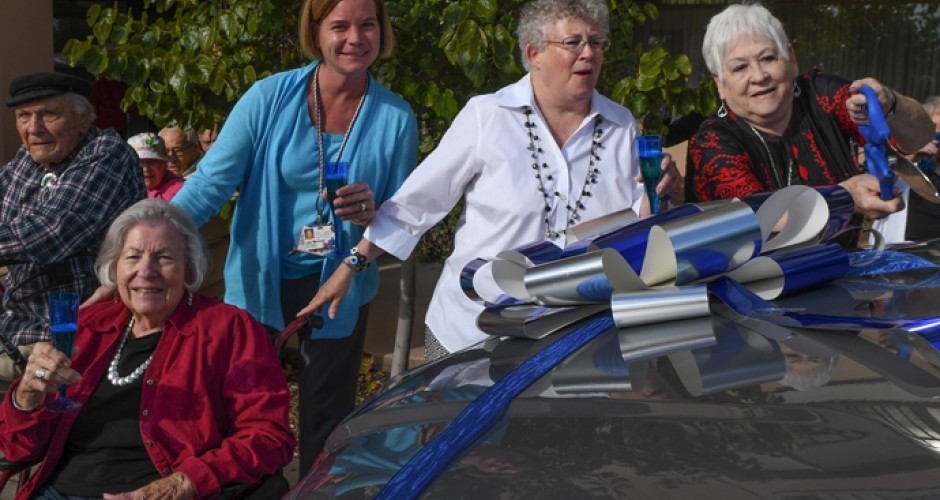 Anita Spain knows how to make the most of her money, but she also wants to do some good in the world. So when her community, Good Samaritan – Manzano del Sol Village in Albuquerque, New Mexico, needed a new van, Anita figured out a way to do both.

I made my living by myself, so I want my money to go as far as possible, and I still want to make a difference. I wish more people knew about this type of gift." — Anita Spain, donor

Anita has had plenty of practice educating others during her retirement. As president of Manzano del Sol Village’s resident advisory council, she was one of the first to see the need for a new van.

“It was the council’s idea to raise money for the purchase of a new van,” say Loretta Dunivan, donor engagement director at the location. “The idea was presented to Lisa Merinar, our administrator, and she encouraged it. They worked together on a plan.”

“Keep me interested. Let me participate,” is how Anita describes what attracts her to a project. “Otherwise, I’ll just pay my rent and go back to my apartment.” The other council members felt the same.

Charitable IRA distributions:
A great opportunity to make a difference for others

Give a gift today!
Here’s what you should know:

For your gift to qualify this year, your gift must be completed by Dec. 31.

If you have questions, we can help.

Having the residents involved proved to be a good idea. From special dinners requiring tickets to other creative ideas, the residents spent six months raising money. They celebrated with a van christening party complete with sparkling cider and cupcakes.

Getting the residents involved turned the tide, says Lisa. “Anita’s leadership is a real blessing. As a donor and a volunteer, her example was critical."

Others noticed Anita’s giving spirit, too. She was voted Volunteer of the Year by her fellow residents and the employees in 2016.

Learning to save and to serve

The campus may have celebrated the new van’s arrival with a big celebration, but life hasn’t always been a party for Anita. The daughter of Texas sharecroppers, Anita knows what it’s like to go without.

“Dry land farming means that cash money was not a part of our lives until the crop produced,” Anita explains. “It’s hard to convey how hard that life was.”

With one of his first good cotton crops, her father purchased cattle and opened a dairy, eventually becoming the only source of milk in the county. It was how he could afford to send Anita to school.

Give now, make a difference now

After college, Anita spent more than 30 years as a music teacher and school administrator in Austin, Texas.

She retired to Albuquerque to be near family and joined St. John’s United Methodist Church where she remains active. Service through the church is “part of my gift to the community,” she says. It was her work on the church’s endowment program committee, in fact, that introduced her to tax-savvy gift options like the IRA charitable rollover gift.

“Many seniors have wills,” she says. “I wish they understood they can gift estate stuff now — make a difference now.”

Making a difference is not something Anita will stop doing anytime soon.

“Jesus taught us that faith is not the only way to receive salvation,” she says. “Working for others is important, too.”