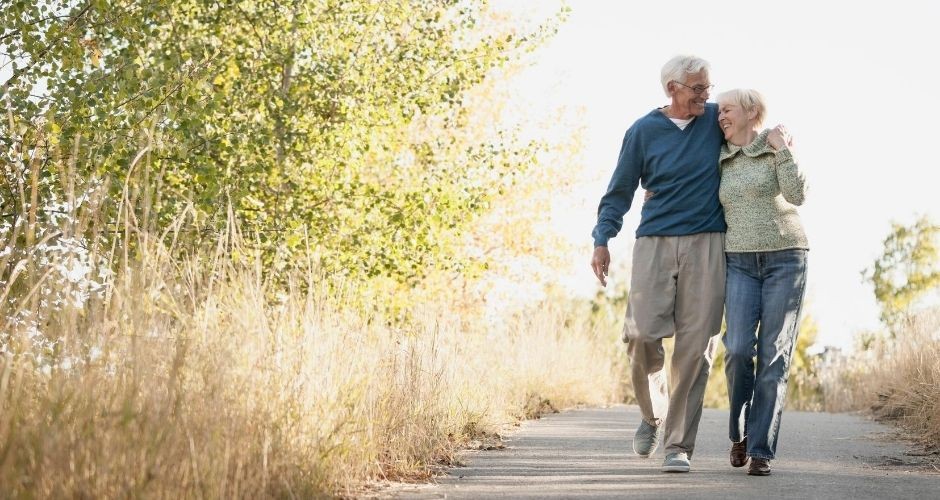 Alzheimer’s is a disease that robs those diagnosed of cherished memories.

There's no known cure, or cause.

More than 5 million Americans are living with Alzheimer’s, the 6th leading cause of death in the nation, according to the Alzheimer's Association.

1 in 3 seniors die with the disease, or some other form of dementia.

These facts are sobering, but there are preventive measures and ways to slow the progression of the disease, says Dr. Lindsay Hines, a neuropsychologist at Sanford Health in Fargo, North Dakota.

Walking is one of the biggest ways to lower a person's risk factor for the disease, or delay the disease’s progression, according to Hines.

“We know that if you walk at least two miles a day, those changes in brain functioning can be pushed out many years,” Dr. Hines says. “People that are lifetime walkers are much less likely to see changes in their cognitive functioning, and are less likely to develop the clinical symptoms of the disease, or they can push them out.”

In a recent interview, Dr. Hines said every moment that an Alzheimer’s diagnosis is delayed “is a big deal,” adding, “if you're going to get it at 75, not getting it until 78 or older is such a blessing. More years functioning independently and not needing help is a really important part of what we look at, and trying to push out those changes in functioning.”

“Anything you do that's good for your heart, that’s going to be good for your brain. (Things like) eating good fats and not the bad fats. The omega-3’s that we hear about, those are all things that are going to be very positive for brain health," she says.

Along with physical activity and exercise, keeping your mind as sharp as possible will also go a long way in prevention, and slowing progression.

“Socialization is one of the best exercises of the brain. It's better than anything else that you hear about, as far as doing those games or crossword puzzles. You hear about those types of things often, but they're not nearly as important as engaging with other people.

She says these types of mental exercises and socialization don't have to be large-scale. They can be as small as consistent trips to the grocery store. Maintaining those connections, big or small, helps to deter isolation. She adds that isolation can be a catalyst for depression and anxiety, two mood disorders that can mimic the symptoms of Alzheimer's.

“It's very important to get evaluated as soon as you have concerns about your memory. The earlier on that we identify it, the better we are able to control those symptoms. Sometimes with memory concerns it's not Alzheimer's, it’s depression. We can treat you and get you better. Those memory difficulties can go away, and that’s very important.”

If someone is diagnosed with Alzheimer’s, Dr. Hines says the first thing they should do is speak with their primary care doctor, to start medication. She says these medications, while they do slow the progression of changes in functioning, get a “bad rap” because patients don't see improvement.

“What they do is hold things where they are, to the extent that a person can stay independent, and live in their home for a much longer period of time than without the medication.

“Many people think that there's not a treatment, but there absolutely is. These medications mean more years of quality of life, time with family, being themselves, and being able to enjoy things from day to day," says Hines.

One way to deter the need for supportive services, Dr. Hines says, is keeping a person independently in their home, focused on daily activities.

“Your personal care is over-learned. I want you to be able to do those things essentially with your eyes closed. I don't want you to think about, ‘Did I brush my teeth? Did I take my medications?’ Those things should be so over-learned and routine that a person doesn't need to think about whether or not that's been completed. Save that thinking space for interactions with friends and family members,” says Dr. Hines.

She says that if there are things that make a person feel overwhelmed, like finances or paying bills, have someone else do those tasks for them.

“The goal is to spend as much time doing things that bring a person joy and make them feel good about themselves, like socialization. That's going to lead to more years of quality of life, enjoying things they're doing, and lead to a more functional independence for a longer period of time.”

Being in a supported environment

While independence is important, Dr. Hines says it’s also healthy to make a transition into a supported living environment sooner rather than later.

“You want to do that before a person gets too sick. Before the disease has progressed to where they have a difficult time with that transition.

“Even though I talked about what we can do to stay home longer, that’s not always the best thing. We want a person to have their routine set up in a place that they’re familiar with. A place that they can know well before the disease progresses to where it's more difficult to make that transition.”

An earlier move will also expose a loved one to more opportunities for socializing, a key activity in slowing Alzheimer's progression, according to Dr. Hines. “Moving into an assisted living facility earlier is going to help foster socialization. You're going to make new friends. You're going to be more engaged in different things. That's going to help a person's functional level maintain at a higher period of time.”

Limiting the number of transitions is also of benefit, says Dr. Hines.

“You want to get to a place and be able to stay there. We often see a dip in functioning with transition, and it can take longer to rebound or get back to a person's functional level the later they are in the disease,” she said.

Two early signs of Alzheimer’s, according to Dr. Hines, include:

Difficulties with memory
“Word finding,” where a person knows what they want to say, “but can't come up with a label or word that goes along with their thought.”