Bronze Star recipient at Society played a part of history 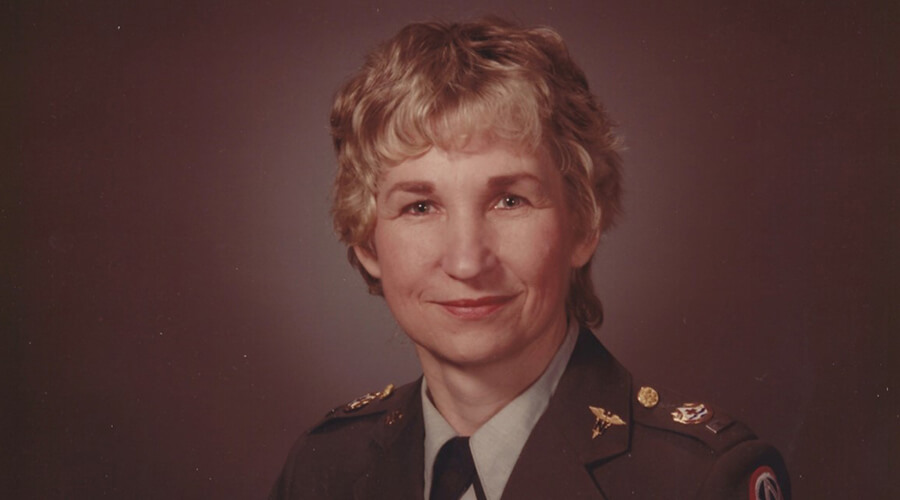 Retired Army Maj. Judy Rosenkotter and her husband Harold were the first to move into the twin homes on campus and have lived here since 2010. The Rosenkotters, married 60 years, love their neighbors.

“They’re all so congenial and friendly. We’re in a great neighborhood. Just really the best,” Judy says.

The veteran community at Grand Island Village, to which Judy belongs, is a cherished group that meets monthly.

“It’s a time when they can come together and just have coffee and talk and share stories,” Society senior sales representative Aimee Steinhardt-Duysen says.

Aimee says staff members are working hard to make the location a welcoming place for veterans. A campus where they can find purpose surrounded by others who have served the country.

“It’s really important that we treat our veterans with the utmost respect,” Aimee says.

'Honor and a privilege'

A Bronze Star recipient, Judy began her military career in the United States Air Force. She was a fleet service dispatcher at McGuire Air Force Base in New Jersey.

“The whole experience was an honor and a privilege,” Judy says when talking about serving in the Air Force and Army.

When she got out of the Air Force, a career in nursing was calling.

“I’ve always wanted to be a nurse ever since I was a little girl,” Judy says. “I believe that’s what God chose for me because it has been such a wonderful experience.

"After training to be a nurse, she met Harold. The couple had two kids and moved across the country following job opportunities.

A career in the Army

In her early 40s and working as nurse at the local VA hospital, Judy became inspired to join the Army Reserve. Even though she was above the age limit, her professional experience was in high demand and Judy was accepted as a 1st Lieutenant.

“There I had the greatest experience of my professional nursing career,” Judy says.

She lights up when sharing stories about her deployment to Saudi Arabia in 1991. Serving in the Gulf War in Operation Desert Storm at the age of 52, Judy helped establish procedures for medical in-processing and ran sick call for the 403rd Military Police-POW Camp.

“That made me a little footnote in history as far as the military police goes,” Judy says.

She was the first nursing officer to handle the role in the 800th Military Police Brigade. For her efforts during the deployment, she earned the Bronze Star for Meritorious Service.

“I didn’t know the importance or the prestige that comes with the Bronze Star,” Judy says.

Judy’s son David, an Army MP, had to tell her how big of a deal it really is. She’s extremely proud to have made a difference.

On top of training medics, she initiated the combat lifesaver course for troops at the base.

If you run into the highly accomplished vet at the Society, you’ll probably find her with a book in her hand. She’s been instrumental in stocking the location’s library.

“The library was done and it was completely empty. My husband said, ‘Judy, take your books and put them on the shelves.’ I’ve been putting books on the shelves ever since,” Judy says.

Typical of a nurse to always be seeking knowledge.

“I do it because I love books. I can’t throw away a book. I have to read every book I come across,” Judy says.

This Memorial Day, Judy and Aimee are remembering the service members who have lost their lives protecting our freedoms.

“I think it’s very important," Judy says. "I think it’s a good reminder to people the sacrifices that people have made over the years."

Aimee says Grand Island Village is always looking for ways to honor vets, past and present.

“I think it’s important to recognize those that have passed that have served our country,” Aimee says.

Staff likes to partner with outside veteran resources for special programming for residents. She’d also love to have a special room on campus just for veterans.

“I think that it’s really important to be able to have a place where they can come and feel safe, be around other veterans. To be able to share those stories. Have purpose in life again,” Aimee says.

A military pioneer herself, Judy encourages others to raise their hand and join the service.

“I think that’s the best thing that any young woman can do is join the military. There’s so much character, strength and so much to learn that you just don’t learn when you go out into public life,” Judy says.