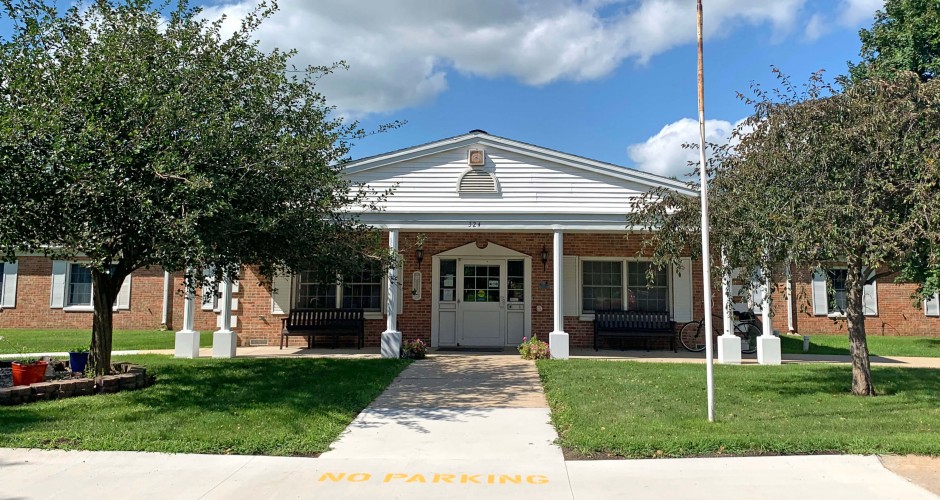 A nursing home means a lot to a small town. It’s a place loved ones are well cared for while being able to live close. It’s usually a significant employer there, offering a short commute and a chance to live out a calling. And it’s a place where history lives – where residents’ and employees’ memories interweave.

George, Iowa, has that kind of place in its Good Samaritan Society location. Typically, about 30 people call it home – people who have deep connections in the community.

Kelsey Mergen has been overseeing operations of the building, the staff and the residents for almost three years as the administrator. In her work, she appreciates the people the most.

“We have really good residents and staff,” she says, “and our community has always been very supportive of our nursing home. So that’s always made it easy to be here.”

When the COVID-19 pandemic came along earlier this year, however, Kelsey faced trials beyond the typical challenges of maintaining staffing and keeping up with changing regulations.

Using guidance from the Good Samaritan Society and Sanford Health, Kelsey’s location created a plan for three zones in preparation for handling any COVID-19 cases that might arise among residents. The zones, meant to prevent the virus from spreading, help keep employees and residents within an area of active infections or within an area of no infections to prevent cross-contamination.

As the George team readied its zones, some residents and their belongings had to be moved to other areas to make room for a “red zone” that could receive residents if they tested positive for COVID-19.

Mindful of how difficult it was for families to have to be restricted from seeing their loved ones, Kelsey prioritized communication. She made sure families were informed beforehand about preparations and updated with changes.

Unfortunately, during a spike of COVID-19 cases in the county after the Fourth of July, Kelsey’s communication eventually included the news that the center faced an outbreak. Her team had done all they could to prepare for the possibility, but the reality was difficult. Among the 11 residents who contracted the virus, two died of the disease. Seven staff members tested positive.

The staff members who could keep working were constantly on the run, walkie-talkies at their side. Employees in yellow and red zones couldn’t go anywhere else in the building, so green-zone workers would bring supplies to drop spots for them.

Kelsey says the center was affected by the outbreak for a month. Staff found out about the first positive case July 11, and the last day of having a red zone – marking the end of 14 days without a new case – was Aug. 12.

“It feels like that four-week period was about three months long,” Kelsey says.

An outbreak – at the time considered to be at least three new cases in a week – in a long-term care center like Kelsey’s triggers an infection-control survey by the Iowa Department of Inspections & Appeals. Kelsey welcomed that audit because, while it seemed like her staff was following all guidelines, she wanted to know if they were missing the chance to do anything better to help prevent the spread of the virus.

The surveyor looked for things such as proper hand-washing, sanitization, meal distribution and PPE use, along with the staff’s knowledge of PPE requirements.

After a day-and-a-half inspection, the surveyor found that Kelsey and her staff were following all guidelines as they should be and doing all they could to prevent cross-contamination.

Through the experience, Kelsey says she learned just what a great team she has. She was able to bring in a few additional employees, but a lot of the regular team worked to handle the demands of staffing three different zones during that month.

“And I think that’s why, having that personal relationship, (the staff) are so willing to step up and take care of and work those extra hours. They’re exhausted, but they also care so much about the facility and these residents.”

The pandemic restricted families from seeing their loved ones. And for those residents lost to COVID-19 or other natural causes during this time, the staff mourns for them and their families, Kelsey says.

Kelsey is grateful for the community and family support shown to residents and staff during the pandemic. They received emails of appreciation from families, with offers to help. The center’s medical director sent pizzas. Families and the community sent flowers to the residents. Groups and families volunteered food and other supplies.

Now, Kelsey says, things have calmed down. Cases in the county have slowed, and the nursing home hasn’t had any additional cases. Residents have been able to visit outdoors, in person with family.

Reflecting on the outbreak, Kelsey says her team has gained confidence and learned a lot about what worked and what they might do differently – if necessary – in the future.

“We obviously don’t want to go through it again,” she says, “but at least we know we can handle it if it happens.”