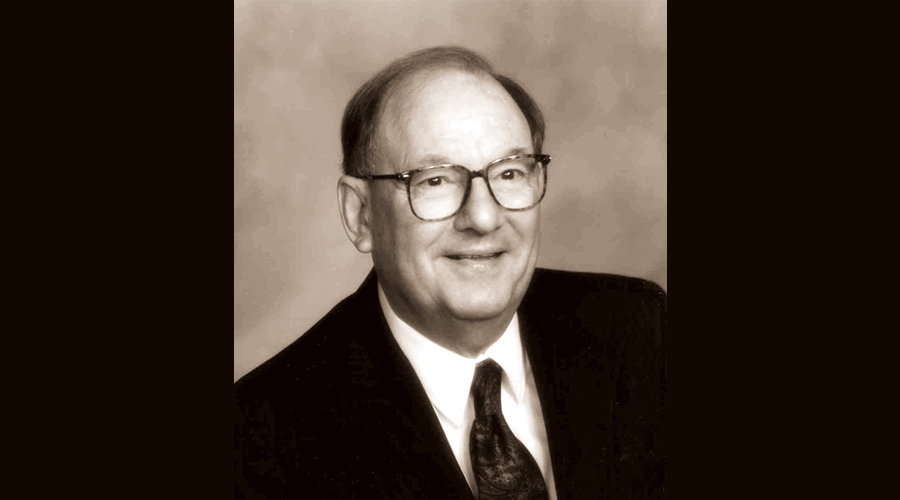 Dr. Charles Balcer was a long-time member and chair of the Good Samaritan Society’s Board of Directors before being asked to become the Society’s interim president on May 1, 1997.

The role might have been a challenge for some, but not for Charles. He was well integrated into the Society having served a total of 13 years on the board.

Charles had a background in military finance, education and administration that set him up for success to guide the Society into the future.

He began his position just a few months after Society President Mark Jerstad died after a short battle with cancer. His leadership helped the Society maintain its momentum in the long-term care industry.

“My dad had a good balance of knowledge between the financial business and the mission of the Society,” says daughter Mary Tranberg.

A life in education

Charles was born May 23, 1921, in McGregor, Iowa. After high school, he attended Winona State Teachers College in Winona, Minnesota. He made the choice primarily because he could get a student pass on the railroad from McGregor to LaCrosse, Wisconsin, and then on to Winona.

In 1940, Charles met his future wife, Elizabeth Belgum, a fellow college student, and the two became engaged in 1942. Charles graduated from Winona State in 1942 and was 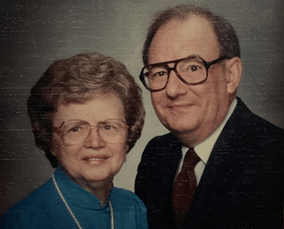 drafted into the Army during World War II in the spring of 1943. He and Elizabeth were married in January 1944 right before he went overseas.

He spent his time in military service in the 87th Finance Disbursing Unit in England and France. He was honorably discharged in 1946 and then worked as a high school teacher for the next few years.

With the availability of the G.I. Bill, Charles decided to pursue a master’s degree and earned one in speech education at the University of Iowa in 1949. It was there he continued to take courses toward his Ph.D. while teaching full-time.

He then went on to become the principal at a junior and senior high school. In the summer of 1954, he received his Ph.D. from the University of Iowa and then served in various education roles mainly in Minnesota. During these years, the Balcers had two daughters and two sons.

Charles accepted the role of president of Augustana College in Sioux Falls, South Dakota, in 1965. During his tenure, he pioneered a full-spectrum special education and deaf education program and established a Native American Studies department. He retired in 1980 but continued as a professor of communication.

His connection to the Good Samaritan Society began after moving to Sioux Falls.

“When we arrived in Sioux Falls in June 1965, we joined Our Savior’s Lutheran Church. Here I met John and Augie Hoeger and became aware of the Good Samaritan Society,” wrote Charles in a 1991 autobiography. “However it wasn’t until I hired Mark Jerstad (grandson of the Rev. August Hoeger) as professor of religion and campus pastor at Augustana that I really understood the organization.” 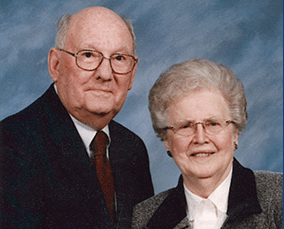 During a conversation with Elliott Thorson, an Augustana professor and Society board member, Charles learned more about the Society’s mission and was asked if he would be interested in being nominated to the board. He agreed and was elected in 1983.

“Our mother was so excited that he was elected to a role in this great organization,” says daughter Beth Amble. “It was a big part of their life. They just loved the people.”

He became chair in 1985 and served several more terms. On trips to board meetings outside of Sioux Falls, Charles made it a point to stop at Society locations. He visited over 60 locations during his five years as chairperson.

When he became interim president of the Society at age 75, he used that time to make sure the Society’s operations were financially sound and that quality processes were in place. He also oversaw the construction of the Jerstad Center on the Society’s National Campus.

When Judy Ryan was chosen as the Society’s permanent president in 1998, Charles looked forward to his next venture.

“I have the best job one can ever have! I tutor a Native American boy at Oscar Howe Elementary School,” he said during an interview for a paper written by Augustana professors.

Charles died in 2007, but his family seeks to continue his legacy of kindness to others and service to the Society. Several family members work for the organization, including son-in-law Greg Amble and grandson John Tranberg and his wife, Amy, and granddaughter Rachel Lawhorn.

“He was the kindest man, very even-tempered. He had empathy for people. Up until the very end, he was faithful. He was one of a kind,” says Beth.