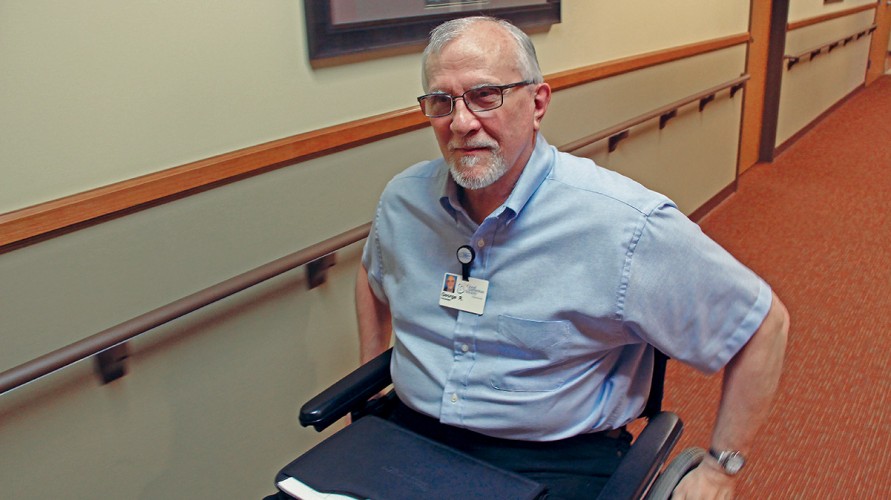 A new road, a second chance at life [video]

Hear how George Rosch found his life's new purpose in the video above.

George Rosch lay sprawled on the ground for a few seconds before trying to move.

Moments before, he’d been on the top of a semi tanker, trying to release expanding pressure from the oil within. But he was too late. The oil blew, and it knocked George off the top of his rig, shattering his world.

“I was a truck driver, I drove truck for 30 years. I’m proud of the fact that I had over a million miles accident free.”

But his fall from the top of the tanker ended that spotless driving career and landed him in a wheelchair.

The road back hasn't been easy

George spent a week in the hospital while doctors stabilized him and assessed the damage to his brain, neck, spine and back.

After two surgeries to fuse vertebrae in his neck and disks in his spine to relieve nerve pain, George had to completely retrain his 64-year-old brain and body to be self-sufficient.

Over the next year following his accident, he grew anxious and insecure. His speech began to slur, and he became increasingly forgetful.

Surgery — one of many — helped balance George’s emotional ups and downs but left him unable to walk. His brain couldn’t tell his legs what to do.

Besides not being able to walk, George also has vision problems.

“I have a vision issue — I can’t track. I have balance problems, so I can’t walk. Short-term memory loss, too. Let’s see, I had bad headaches, pain, I still experience numbness in my legs,” George says.

George gained a new appreciation for life during his stint in the post-acute rehabilitation center at Good Samaritan Society – Ambassador in New Hope, Minnesota.

With the encouragement and guidance of the staff at the rehabilitation center, he regained his strength.

"They helped me to deal with the emotional part, and to find the acceptance I needed to move on with my life," he says. "I found purpose in my life."

It took three months for George to sharpen his memory, regain strength and learn to maneuver his wheelchair.

Learn about George's outlook on life following his accident in the video below.

George is now a greeter in the New Hope location where he received rehabilitation.

Because of his experience, he can relate to people who walk in the door. Some people need a little guidance and inspiration to lift their spirits.

Being here, I found my purpose in life." – George Rosch, on volunteering

Carol Hamilton is one of those people. A broken foot caused her to cross paths with George.

A warm conversation with George made her feel right at home in her new surroundings.

"You get to visit with him during meal times or if you see him in the hall, you just say, 'Hi George, how are you doing today?'" Carol says, as she and George share a laugh.

George says his purpose in life now is to help others — to help them see they will get better and to believe in themselves.

"I'm so excited about my life here," George says. "It just means the world to me, and this is my life. I look forward to getting up in the morning and coming to work. This is my job now."

We provide services — and volunteer opportunities — in 24 states