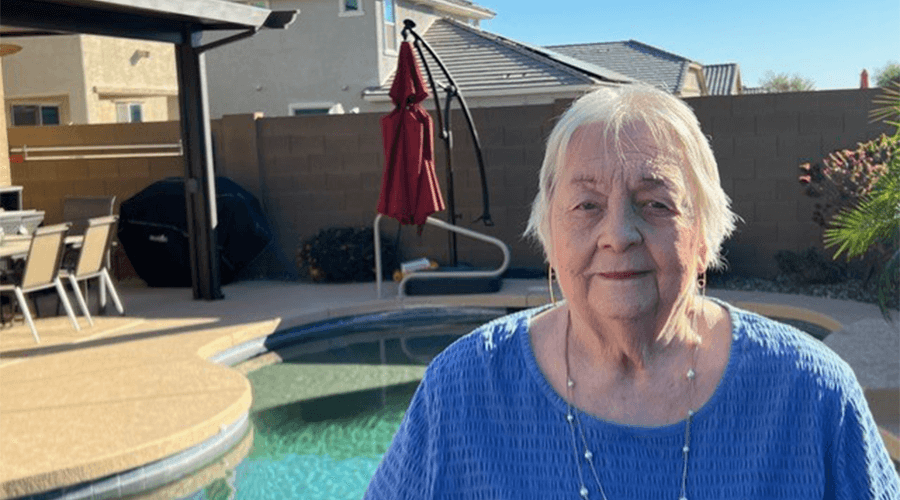 Lynn Assimacopoulos didn’t realize it at the time, but being laid off from her job as a hospital staff nurse would be one of the best things that could’ve happened to her.

The year was 1990 and Lynn was looking at job ads when she noticed one for a nurse writer at the Good Samaritan Society’s National Campus. This temporary, six-week position intrigued her.

“I had never really heard much about the organization and had absolutely no experience in long-term care, yet I could not get the words ‘nurse writer’ out of my head,” says Lynn. “Nor could I even believe there was actually a job about the two things I loved the most – nursing and writing.”

Lynn began writing at the age of 6 and had wanted to be a journalist but she ended up going to nursing school instead and had worked at the Red Cross, a home health care agency and local hospital ICUs in Minneapolis, Minnesota, and Sioux Falls, South Dakota. Still, she decided to apply at the Society. And after being hired, she was elated.

“Since the very first day, I loved every minute of it,” Lynn says. “I continually prayed that they would need me to stay on permanently.”

Her prayer was answered at the end of those six weeks. The temporary job became a part-time job and later, a full-time position as nurse writer/project consultant.

As the sole nurse writer on staff, Lynn aided in the writing of departmental policy and procedure manuals with the Society’s nursing, dietary, social work, activities, medical records and therapy consultants. She also taught a class on cultural awareness for some of the Society’s workshops.

“I couldn’t wait to go to work every day,” she says.

Inspiration for a book

Lynn also liked being able to pray at work. But the thought of giving a devotion made her nervous. Knowing she might be asked by the Rev. Dr. Greg Wilcox, she wrote a few devotions just in case.

“He caught me one time by the coffee machine and asked me if I’d give devotions and I couldn’t say no,” says Lynn.

After she gave her first devotion, a co-worker spoke to her and encouraged her to write a book. She decided to try, but she didn’t tell her family.

“I secretly took it to a local publishing company,” Lynn says. “For Christmas, I gave each of them a copy and they looked at me in surprise.”

Her book, “I Thought There Was a Road There,” was self-published in 2000. It was a compilation of some of the devotionals she had written during her time at the Society, along with others she had written.

“I felt like I developed those devotional ideas because I worked there, so I gave all the proceeds from the book back to the Society,” she says.

Even though she retired in 2005, Lynn still loves to write. She had another book published in 2015 titled “Separated Lives.” The book is about her helping a young man search for his birth parents – a “sometimes tearful journey with unexpected twists and turns.”

At 83, she still wishes she could work as a nurse but she tries to keep busy in other ways. She spends much of her time staying in contact with her three sons, seven grandchildren, friends and former co-workers.

She reflects fondly on her time with the Society.

“It was the most wonderful organization with the best, honest, truly Christian, hard-working persons I had ever worked beside,” says Lynn. “I will forever cherish every day I spent there. It was a joy and one of the most rewarding treasures of my life.”