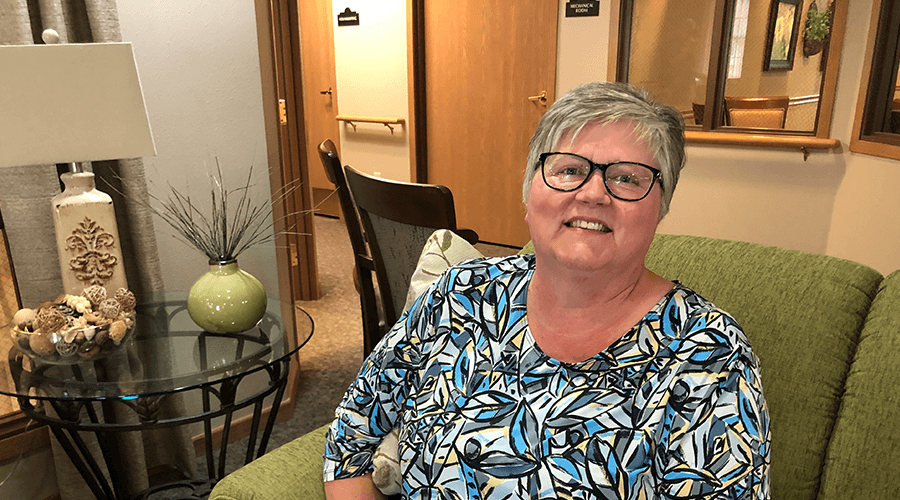 A close relationship with her grandparents led Jo Planting to pursue a career in long-term care. Right out of high school, she decided to take a job as a nurse aide at Good Samaritan Society – Estherville in Estherville, Iowa. The feeling she got serving seniors confirmed that it was the right choice.

“I always thought it was so inspiring to hear peoples’ life stories and adventures,” says Jo. “I liked to get to know them on a personal level.”

After a few years in her first role, Jo left for a while and decided to take some post-secondary classes. She was happy to return to the Estherville location as the activity director.

The role included a lot of one-on-one time with residents, and she liked having time to sit and visit with them.

“It seemed too good to be true to do what I enjoyed doing,” Jo states.

In addition to many one-on-one visits, she and her team did various cooking activities with residents and took them on excursions, including boat rides on the Queen at nearby West Lake Okoboji. They also started an annual carnival that still takes place today.

A fulfilled calling through senior living

After 20 years of serving residents through activities, Jo pursued a new role on campus. She learned about the opportunity to become the senior living manager and couldn’t let it pass her by.

Jo has now served in that role for 20 years. As a lifelong member of the community, she finds it fulfilling to assist people, many of whom she knew before they moved to the campus.

“I really enjoy helping people through this journey,” she says. “They move in and realize they get to make new friends and have a community, and they end up saying they wished they would have done it sooner. Assisting them through the transition is very rewarding.”

Jo says the environment in their senior living building is like an old-fashioned neighborhood. Residents have the privacy of their own apartment and opportunities to socialize with neighbors over a cup of coffee, a card game or while gardening outside in the raised-bed gardens.

“It’s a very pleasant place here in the apartments. Nice and quiet,” states Jo. “Most who live here are busy in the community.”

Several residents attend events at their churches, go to ball games in the community and also participate in card clubs and meetings. Many do volunteer work and most drive.

Jo says she’s learned a lot over the years from the experiences of all the residents. She’s also grateful for the encouragement and special bond with co-workers.

Some of her positive memories from the last four decades include working with her first supervisor, Erla Scherschligt, who was the director of nursing and a great mentor to her. She also was positively influenced by retired administrator Bruce Radtke.

A fulfilled calling through baking

As for the future, Jo plans to continue working for the Society while also making time for baking.

She started a home baking business several years ago and uses a lot of the recipes she’s been given from residents. Once a month, she takes a day off from work to bake cookies, bars, cakes and cinnamon rolls. She then takes them to a small gift shop in Estherville to be sold.

“When and if I ever retire, I’m going to hopefully expand my baking business, but I haven’t decided when that will be,” she states. “I’d like to do a little more traveling, too.”

As she sums up her four-decade career, she’s thankful she’s been able to make a difference in other peoples’ lives while learning a lot about life from them in return.