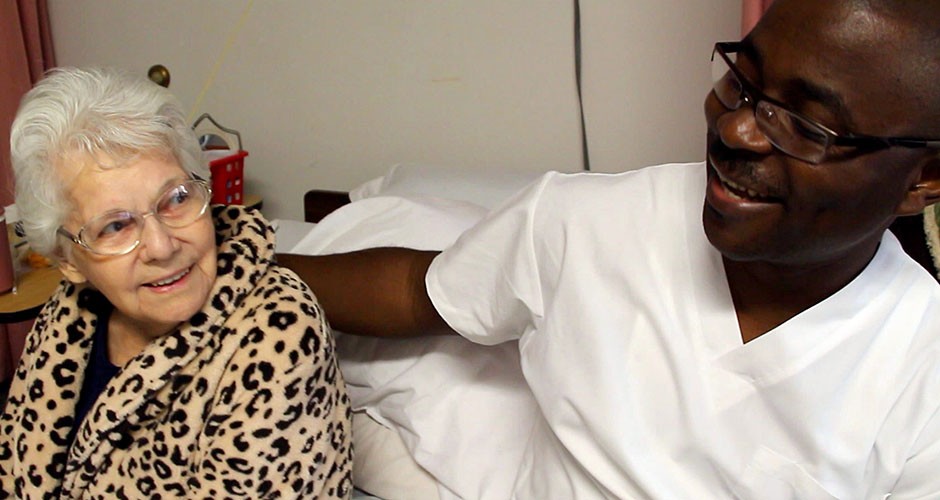 “Life was miserable for us,” Kodjo says of growing up poor in West Africa.

Things got even worse after Kodjo’s father died, leaving their family — including Kodjo’s mother and two siblings — with no income.

“In Africa, especially in my country Togo, we don’t have any assistance from the government,” Kodjo says. “You are on your own.”

Today, this humble, soft-spoken man has escaped the poverty of Togo.

He, his wife, and their three sons now have a home in Iowa, where Kodjo works as a nurse at Good Samaritan Society – Ottumwa.

His job gives him an opportunity to do something he loves: care for people.

And it's also provided the means to bring hope to impoverished children thousands of miles away in his home country.

The long road from Togo to Iowa

When Kodjo was 38, he moved to the United States with his family. Ottumwa became their home when a host family there offered to take them in.

Kodjo calls poverty “a contagious disease” that can’t be escaped unless some force intervenes. In his case, Kodjo says, God changed the situation.

“We [had] been dreaming to come to America for long, long time,” he says.

He says God opened the door to make that dream come true in 2009.

Kodjo and his wife got jobs in a meatpacking plant in Ottumwa. But Kodjo felt God wanted him to find work serving others.

My prayer is that God uses me as a good example." – Kodjo Bossou, Good Samaritan Society employee

In Togo, Kodjo had earned a theology degree and was a preacher for many years.

He’d also been interested in a medical career ever since he was a kid.

“So I decided to go to school for nursing,” he says.

He received a degree in 2015 and began looking for a place to serve.

“My first application for a job was Good Sam,” he says of the rehabilitation and skilled nursing center where he now works. “Why Good Sam? I don’t know, but today I believe this is in the plan of God.”

Fulfilling a mission for others in need

With a paycheck coming in from a job he loved, Kodjo knew he wanted to share the blessing of steady work by helping children in Togo.

The family decided they could live on one income, and Kodjo donated his entire nursing salary to build the AKEM (Africa Kids Evangelism Ministries) school in Togo.

He purchased a tiny piece of land there, and then paycheck by paycheck, brick by brick, he set to work.

Kodjo’s plans for the school's future, and how you can help

Kodjo’s goal is to have enough classrooms so that the school can offer a K-12 education.

“We started to plant a seed, the seed of the Gospel, the word of God in those children’s lives,” he says.

Since starting the school in 2015, he's been able to add classrooms up to ninth grade. Over the next year, he would like to add the last three grades.

“So it is important for us to go back and build at least one classroom this year, to be able to keep those children that are moving to the next level.”

Donations may be made at:

Kodjo's salary goes directly to the school to pay for building and classroom materials. But with plans to add six more teachers, the school needs more funding for teacher salaries. Kodjo is considering adding a chicken farm as an extra revenue source.

Today, nearly 1,100 kindergarten through ninth grade students attend classes free of charge, or with what they are able to pay. In the past two years, medical teams from the University of Virginia have also come to perform eye exams and treat illnesses.

The school has also hosted educational classes for adults on topics such as dental care and food safety, becoming a central part of the community.

An understanding and supportive workplace

The Good Samaritan Society’s willingness to support him made all the difference, says Kodjo.

“If I was not working here, I don’t know if we’d be able to do what we’re doing,” he says. “I work a lot of hours here and I don’t know if I would have that opportunity anywhere to do the same thing.”

You can see Christ working through him and through his spirit. You can feel it — in his smile, in his eyes, in the way he talks about the staff and the residents and his mission." – Administrator Vani Barry, about nurse Kodjo Bossou

His co-workers at Good Samaritan Society – Ottumwa have helped him raise money for the school with bake sales and other events.

The center also grants him a general leave so he can spend a few months a year in Togo, where he works on the school and ministers to the children.

“He is one of our best nurses...we just want to help out, and support his mission. He takes the time and we hold the spot for him. It’s bigger than all of us.”

Serving others with God's love and compassion

Kodjo’s generous nature has been a blessing to residents at Good Samaritan Society – Ottumwa, says Jeremy Skinner, the center’s chaplain.

“He…will sit down with families and pray with them and just sit in silence with them,” says Jeremy. “Whatever it takes to get through the difficult times that they may be going through.”

“He’s there for the residents, everything he does,” Vani adds. “He’ll kneel and pray with them.”

When you think of mission, it’s about what you can do for others. … And when you look at Kodjo, his whole life is dedicated to serving and doing just that. He believes that’s what God has created him for. And he’s living that out in an incredible way." – Chaplain Jeremy Skinner, about nurse Kodjo Bossou

Jeremy says Kodjo is one of the most selfless people he knows.

“He believes that is what God has created him for, and he’s living that out in an incredible way,” Jeremy says.

“When God created us, he didn’t create us to be selfish people. He created us to be selfless people, and that’s what Good Sam is all about — meeting the need of others.

“When you look at Kodjo, his whole life is dedicated to serving and doing just that.”

Watch the video below to see Kodjo in action, and hear co-workers talk about the mission he's dedicated his life to.


Find your calling serving others

Find a career opportunity near you