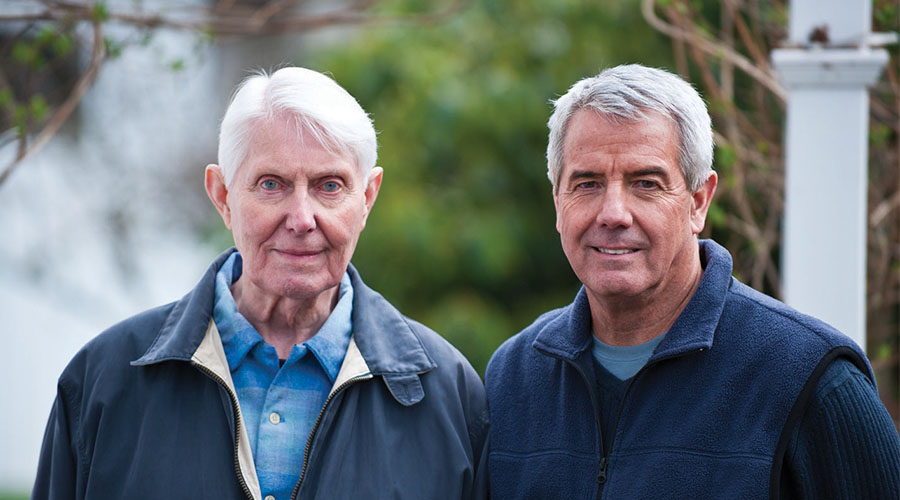 When people think of hospice, they may picture a patient receiving services at the end of their life. In actuality, hospice caregivers also take care of family members.

“The sooner we can get someone on hospice, the more time we can help the family work through their anticipatory grief,” says Karla Banuelos, RN, hospice clinical manager at Good Samaritan Society – Home Care in Albuquerque, New Mexico. “We can help give them ways they can care for their loved ones through their grief.”

Paul Huybrechts was impressed by the support the Good Samaritan Society team gave him as they provided hospice care for his dad, August Huybrechts.“They were very helpful to me,” says Paul. “I am as grateful for them as he was. I couldn’t believe how much they helped and improved my days.”

“We have a very holistic type of care with a team approach,” Karla says. “We have a nurse for each patient and depending on the needs, LPNs, home health aides, chaplains and social workers.”

For about six years, Paul was August’s caregiver in his home. Paul says in terms of his dad’s age, he was very healthy. At 99 years old, August was rarely sick. Other than vision and hearing loss, Paul says his dad had no acute health issues.

When August’s doctor suggested hospice services, he wasn’t eating very well and had lost a lot of weight. Paul says his dad reluctantly agreed to receive care in his home, but after the first visit was pleasantly surprised.

“The caregivers were fantastic about making him realize they were there to help make him comfortable and even get better,” says Paul.

Wayland Hobbs had a similar experience when his wife, Maria, received hospice care from the Good Samaritan Society team.

“We had some wonderful nurses, especially Elizabeth,” he says. “She was awesome. They were all good, but Elizabeth was special to my wife. My wife fell in love with her. She came twice a week.”

Maria had breast cancer and chronic back pain and her daughters wanted her to have hospice services in her home. The couple agreed and they couldn’t have been happier.“

We had a very good experience with them,” says Wayland. They were good about providing us with information about different things they could do.”

“Hospice can offer a lot of support for families,” Karla says. “We keep our ratio from patient to nurse low, so nurses have more time to spend with each patient. We also offer durable medical equipment, oxygen, shower support, nebulizers, walkers, canes, specialty mattresses and beds.”

During August’s time on hospice, Paul liked being able to talk to the team, knowing they would listen to his questions and concerns. He also appreciated the literature they gave him.

An aide visited his dad about five days a week to bathe him and a nurse visited once a week at first and then twice a week later on.

“He just loved the woman who came and bathed him. She was terrific,” Paul says. “The two of them got along really well and he thought the world of her. She was a blessing. He loved his nurse, too.”

August also received visits from a social worker who came every few weeks and a chaplain who came once a week. A hospice volunteer visited once a week for an hour.

“My dad liked that person a lot and they had good conversations,” Paul says of the volunteer. “That was helpful to him.”

Paul can’t say enough about the support he received as a family member.

“They were there for me as much as for him and always interested in how I was doing and whether I was able to get away and get some time for myself,” says Paul. “I couldn’t believe how much they helped and improved my days.”

After August died just six months shy of his 100th birthday, Paul continued to receive support from the hospice team.

The social worker checked in with him several times. He also heard from the nurse and the chaplain. And he received a letter several months afterward that let him know there were still services available to him.

“I felt from all of the people that they were there to support us very much like a friend,” says Paul. “I didn’t feel like it was their job. It was very genuine.”

As Maria’s life was coming to an end, Wayland called the hospice team to have them send a nurse. He was thankful Elizabeth was on duty and able to be there and provide comfort care to Maria, himself and their family.

“It was just a wonderful thing for her to be here,” he says. “It was awesome.”

After 50 years of marriage, Wayland said goodbye to his 82-year-old wife.

“She wanted to go home, so I said, ‘that’s fine,’” says Wayland. “She passed away right in our living room which is what she wanted.”

"Even though it is end-of-life care, it doesn't mean we're here to hurry or slow the process. We're here to guide and support all along the way," says Karla.

We provide care and support when the time is near. Learn more about our hospice services.