Reinfelds family plays an important role in the Society's history

It was 1949 when Uldis Reinfelds, then only 5 years old, and his parents, Nikolais and Rita Reinfelds, traveled by boat from Germany to the U.S. The family was part of a group of more than 50 people who the Good Samaritan Society sponsored for work. 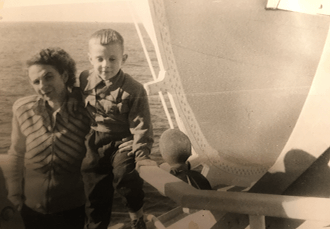 But the sponsorship may not have happened if not for a chance conversation between Uldis’s uncle Paul and the Rev. August “Dad” Hoeger.

Paul had also been sponsored. He traveled from Germany to North Dakota, where he worked on a farm. One evening, he was invited to church to hear a guest who spoke German. The guest was the Rev. Hoeger.

After the service, Paul told the Rev. Hoeger how his family lived in a displaced persons camp in Germany because they had fled from Latvia when unrest broke out. His relatives, Nikolais and Rita, were looking to make a fresh start.

Dad Hoeger made arrangements for them to live and work at the Society.

Uldis remembers traveling by train from New York to South Dakota. When his family arrived in Sioux Falls, the Rev. Hoeger’s son, John Hoeger, greeted them and took them to a small, country nursing home near Parkston called the Colony of Mercy.

The Reinfelds were always in touch with the Hoegers, who treated them like family.

“Dad Hoeger used to visit us quite a few times. He was always trying to make things a little bit better for everybody,” says Uldis. “I thought of Dad Hoeger like a grandfather and the other Hoegers like aunts and uncles.”

After being in Parkston for two years, the Reinfelds were asked to transfer to Olathe, Kansas, where the Society had just purchased a nursing home.

The Rev. Hoeger’s son, Augie Hoeger, helped them get established there. The Reinfelds lived in two rooms on the second floor, eventually moving to their own home next door when Uldis was 12. They then had another son, David, when Uldis was 14.

When the family first moved to Olathe, Uldis attended a one-room country school. It was there he became fluent in English. He remembers many of his conversations with residents growing up.

“It was always fun. I spent a lot of time talking to them when I was little,” Uldis says. “The old guys loved to tell a kid tall tales.”

Uldis got a degree in business and did graduate work in accounting before joining the Army and serving in Vietnam from 1968 to 1970. When he returned, he began working at the nursing home to help his parents out.

With a natural mechanical ability, Uldis did all of the building maintenance himself. If there was something he didn’t know how to do, he tackled it anyway and learned as he went.

Uldis met his wife, Claudia, in 1979 at the nursing home. She was a teacher and worked part-time there. They fell in love and got married in 1980. 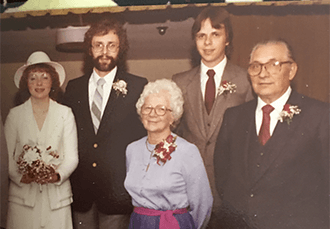 “We got married in the activities center,” Uldis says. “All our friends were there. The service was performed by our fathers.”

The couple had a daughter, Nikola, and Uldis continued to work for the Society as the director of maintenance until retiring in 2010. He and Claudia now enjoy spending time with their three grandchildren.

Nikolais and Rita retired in 1981 after more than 31 years of service. They were the first residents to move into a senior living apartment at Cedar Lake Village on the Olathe campus. Nikolais died there and Rita eventually moved into assisted living and then the nursing home. She passed away in one of the rooms she had designed.

Uldis and his parents' devotion to the Society was rooted in its Christ-centered mission of caring for people in need.

“The overall feeling of a Christian organization was always an important thing,” Uldis says.