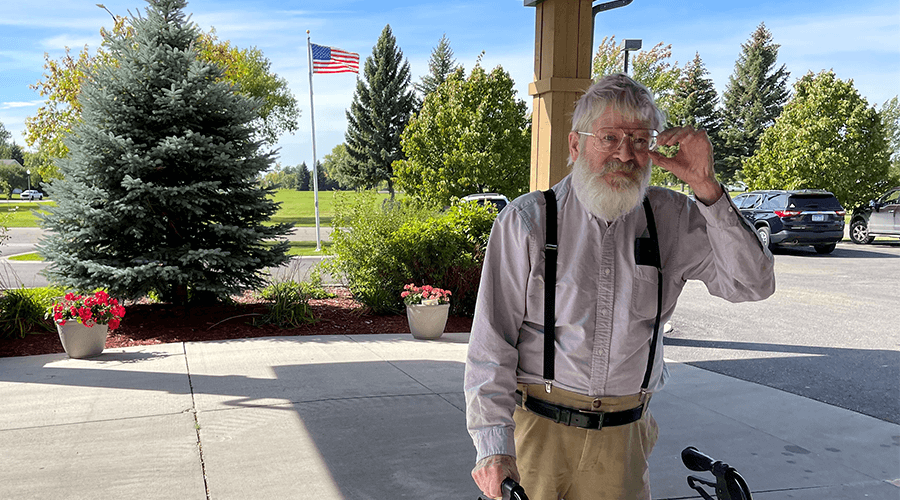 Mike Gaffey, Ph.D., is celebrating 76 trips around the sun this December.

A professor of space studies at the University of North Dakota in Grand Forks, Mike says being able to wake up and walk around each day is out of this world.

“When I was in high school, I broke my neck,” Mike says.

During a family lake outing in northern Iowa, where he grew up, a diving accident almost cut his life short.

“Initially, I was paralyzed from the neck down,” Mike says.

A platform he and his siblings were using drifted in over shallow water. Not realizing it, Mike dove in head first.

“I went straight down and broke my spine in the process,” Mike says.

When he came out of the water, he was as blue as the sky. Many didn’t think he’d survive.

“The next morning, neighbors started coming around with hot dishes and all sorts of things for the family because the news reports had me dead on arrival (at the hospital),” Mike says.

Miraculously, he made it and an experimental surgery got him back on his feet with the help of a walker.

Passion for astronomy and geology

Motivated to make the most of his second chance at life, Mike is an accomplished academic and an award-winning professional with a passion for astronomy and geology. Years studying each took him from the University of Iowa to MIT, where he earned his Ph.D. in 1974 in earth and planetary science.

His interest in space and rocks started at an early age on the family farm in Iowa.

“We had lots and lots of rocks from glacial deposits in our fields. When my father would get upset with us, he’d tell us to take a wagon and a tractor and go out and pick up rocks. My brothers regarded that as a punishment. I regarded that as fun,” Mike says.

Mike adds, “it runs in the family. All my sisters are rock happy and regularly search the rock piles in our neighbor’s fields for neat specimens.”

World-renowned for studying asteroids and meteorites, Mike was honored with two major awards in 2006 while working at UND. The Planetary Division of the Geological Society of America presented him with the G.K. Gilbert Award, and the Meteoritical Society gave him the Leonard Medal. A UND news release at the time says it’s “the equivalent to getting both an Oscar and a Golden Globe.”

When it comes to space, Mike says he’s most interested in “the search for life and the possible settlement of Mars by humans.”

This semester at UND, he’s supervising and teaching a class on Mars to 24 graduate students.

Move to Society about safety

Mike recently made the move to an apartment at the Society in East Grand Forks because he feels safer there. Winters in the north bring many challenges. One of which was an icy parking lot between his old apartment and garage.

“I was skating across the parking lot and at my age I don’t like falling. Period,” Mike says.

He doesn’t have to deal with that fall risk at his new home thanks to connected parking garages.

“Decided it was a big improvement,” Mike says. “It feels a lot safer getting around there.”

Safer to get around and be around others. Mike says he and most of his neighbors at the Society are vaccinated against COVID-19.“We’ve got virtually everybody vaccinated and that’s the key,” Mike says. “The people who are eligible but don’t get vaccinated really are taking a hideous (and unnecessary) risk for themselves and the people they associate with.”

Having a nurse for a mother, he’s always been first in line for vaccines.

“I got used to the idea that if there is an injection that will minimize or prevent something, you go for it,” Mike says.

Mike remembers the polio epidemic in the 1950s. He says there was “rejoicing” when a vaccine was developed.

'There are people there to make life easier'

While he’s as independent as ever, he loves knowing Society staff are nearby.

“If I need repairs, I can just ask someone and they’ll do it. If I need meals, I can order them,” Mike says. “There are people there to make life easier which is something that is always nice to have.”

Mike says making this move early sets him up nicely heading into the future. If he transitions to needing nursing care, he can receive it right at his current apartment.