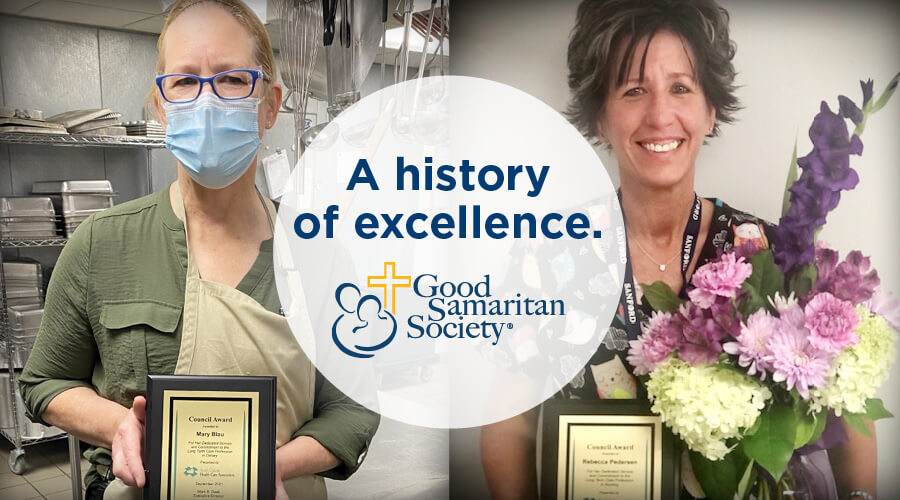 Three long-time Good Samaritan Society staff members know what it’s like to persevere through the challenges of a pandemic. Their hard work and dedication were recognized when they received awards at the 70th Annual South Dakota Health Care Association’s fall convention in Sioux Falls, South Dakota.

Phil Samuelson, executive director of operations for the South Dakota region, said it was a rare event for three Society caregivers to win in the same year.

Rebecca Pedersen – Director of Nursing Services of the Year Award

Rebecca Pedersen, the director of nursing services at Scotland, has worked there for 27 years.

“My career in long-term care has been amazing,” says Rebecca. “Every day I get to go to a job where I can make a difference. I can be the hands and feet of Jesus, along with my team, helping to bring joy, peace and comfort to those we serve. There is no higher calling for me.”

Rebecca grew up on a dairy farm near Waseca, Minnesota, where she learned the value of hard work and spent a lot of time with her grandma and other older family members. During college at Bethel University in St. Paul, Minnesota, she loved working as a CNA. An instructor who witnessed her special connection with older people encouraged her to go into long-term care.

The pieces came together when a friend who lived in southeast South Dakota encouraged her to check out the area. She visited and liked it.

“I started as a new grad nurse and moved to Scotland where I knew no one,” Rebecca says.

She quickly acclimated to small-town life, married her husband and had three sons, who are now young adults.

Rebecca became the director of nursing services 20 years ago. Her role includes building a cohesive team of nurses, med aides, restorative aides and certified nursing assistants who are motivated and equipped to do their jobs well.

“I work with amazing people every day. Most of the nurses on my team have been here for decades with me,” says Rebecca. “I couldn’t do it without them. They are the ones who make me look like a shining star.”

Once, when a resident with terminal cancer moved into the center, Rebecca was a part of helping her get dressed up to attend her grandsons’ football game. The football team brought the proud grandmother flowers and gave her hugs.

Mary, the assisted living manager at the Herreid location for the past 30 years, was surprised when she found out she won an award.

“I really felt like I was sharing it with my staff and National Campus as well,” says Mary. “ I have such wonderful co-workers. They’re definitely friends.”

The team at Herreid is small but mighty and the staff works hard to support each other.

“I’m really thankful for the support of my co-workers. They’re the backbone of the place,” says Mary. “They go above and beyond.”

She and the team love creating fun moments for residents during National Assisted Living Week each September.

“We try and make it better and better every year,” Mary says.

“I think that tells a lot about Mary’s dedication and her expectation for her staff,” says Phil. “They do extremely well at treating the residents like their own family.”

Mary is originally from Strasburg, North Dakota, and went to nursing school in Pierre, South Dakota. She has two adult daughters.

Mary started working at Sioux Falls Village in 1979 as a dishwasher, before becoming the dietary supervisor and then the dietary director – a role she held for more than 30 years.

Food service has been a part of Mary’s life since she helped in the school lunch line. In high school, she worked in the kitchen at Good Samaritan Society – Sioux Falls Center.

One of Mary’s major accomplishments is creating a central kitchen at Sioux Falls Village to service all the Society locations in the city.

“We worked on that for about a year … and in 1999, we started delivering the noon and supper meals,” Mary says. “We do all of their cooking. It’s quite a big operation.”

Her husband and two children often helped her at the Village during holidays. Mary enjoyed creating monthly fine dining experiences for the residents and having a dinner theater with O’Gorman High School students.

Mary recently stepped down from her director role to be a cook in the assisted living building. She enjoys having more interactions with residents now.

“My goal was always to work for this campus for 60 years and I’ve made it to 42,” she says. “I absolutely love it. I’ve been treated like family. I can’t think of a better company to work for.”