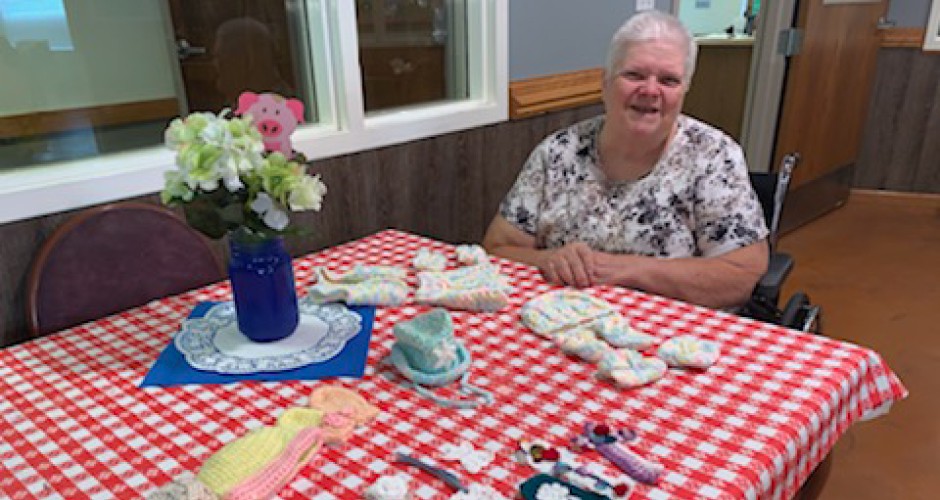 This summer has given residents at Good Samaritan – Hays in Hays, Kansas, the chance to get some fresh air, watch Royals baseball, play Wii bowling – and also participate in the center’s first-ever fair.

New spin on an old tradition

County fairs, traditionally held in late summer, bridge agricultural traditions with newer thrills. They give children a chance to display their animals, handy work and other skills.

They also give people a chance to try delicious food – from pies to cheese curds.

Activity Director Jackie Honings and her co-workers wanted residents to feel the excitement of the fair, so they got busy planning a week full of activities.

Giving them that extra joy in their day really makes the difference.” – Jackie Honings, activity director

The fair will include a baking contest, animal visitors that come to the window, games, a craft fair and prizes.

Residents are excited to judge the baked goods that staff enter. A few residents also decided to enter the contest. Each day during the fair will feature a different baked good, including pies, cookies, cakes, breads and bars.

Contestants will wear masks while baking and use proper handwashing protocol.

In past years, residents took a bus ride through the fairgrounds to see animals. This year, animals will parade past the outside windows.

A variety of games are also planned – such as a ring toss, a can toss and bingo. Residents will be socially distanced and wearing masks while playing. Old-fashioned candy, such as Sixlets and Cowtails, will be given as prizes.

Residents can submit original artwork or pieces from the month’s art activities to be judged in the craft fair.

In the days leading up to the fair, skilled nursing and memory care residents helped make flower decorations for the table centerpieces. They also helped make ribbons that will go to the winners of the baking and craft competitions.

Residents have gotten used to spending much of their time in their rooms, but the team at Hays is hoping the fair will be a good reason for them to socialize in a safe way.

“We’re hoping this fair brings more people out of their rooms,” Jackie says.

The fair happenings nicely complement the regular activities at Hays, including Wii bowling leagues – one for residents and one for staff.

“Each week a staff member is paired up with a different resident,” says Jackie. “There’s so much laughter you can hear it throughout the entire building. You see people peek out of their rooms to see what’s going on and they come out.”

Residents also like to sit outside on the back patio. Jackie says it’s a nice space with a gazebo and allows residents to enjoy the fresh air in a private space.

“We have a lot of farmers that just like to be outside,” she says.

For those who would rather stay inside, they have a large window that looks out onto the street.

Whatever residents choose to do to, Jackie is happy to help provide them with meaningful activities.

“It’s just great to see them smile and have a good time and joke around with each other,” she says.