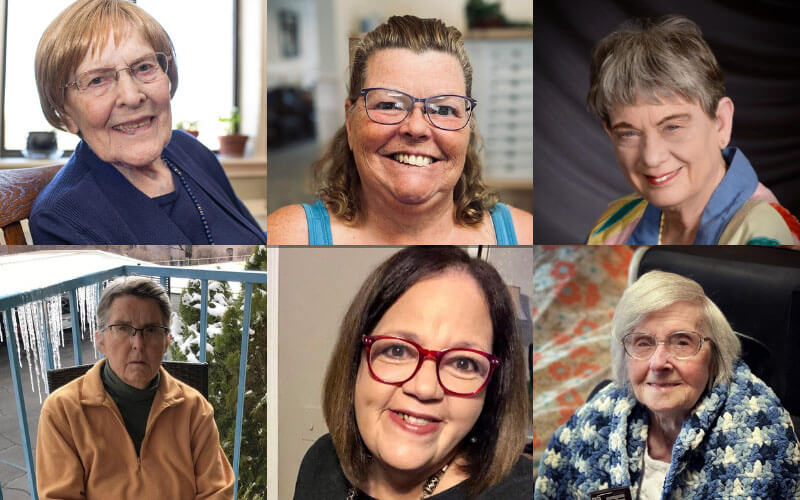 There are incredible women living at the Good Samaritan Society all over the country. We caught up with a few for this story. As you’ll find out, the residents we spoke with are staying active and living with purpose.

Before the pandemic, Carol Riddlesperger served as storekeeper at Good Samaritan Society – Denton Village in Texas. The 102-year-old resident also loves participating in the location’s choir. Turns out Carol has a storied history when it comes to volunteering.

She’s the founding director of the national Retired and Senior Volunteer Program (RSVP).

Carol says the program is about “encouraging people, who are retired, to do volunteer work in not-for-profit agencies. They have a lot of gifts.”

Carol is also a well-known advocate for civil rights. As part of the Denton Women’s Interracial Fellowship, she fought for racial equality in the 1960s. The fellowship started as a group of white and black Christian women who welcomed desegregation.

“The way we managed things prior to that, they were second-class citizens,” Carol says.

The fellowship brought white and black families together in Denton. Carol is passionate about making Denton an open community that is welcoming to everyone.

“What really got me was when one of the women said that when she went to a department store, they wouldn’t let her try on dresses. That hits you in a vulnerable spot,” Carol says.

Among her many other accomplishments, Carol is an Augustana (SD) graduate with a master’s in Library Science from the University of Texas. One of her favorite certificates she keeps on her wall is the one her mother earned after graduating from the Lutheran Normal School in Sioux Falls in 1906.

Education is no stranger to Rachel Gonzalez. She got her undergrad and one of her two master’s degrees from Columbia University. Yes, the Ivy League school.

“I love teaching. That’s my life. I will die teaching,” Rachel says.

The former school principal is a New Yorker who now lives at Good Samaritan Society – Kissimmee Village in Florida. Six of her family members also live on campus. At 63, she’s one of the younger residents in her neighborhood and doesn’t hesitate to assist anyone.

“I help everyone. This is my heart. I’m a serving person,” Rachel says.

From getting groceries for people to giving rides on her golf cart, she’s willing to chip in. But she’s up to way more than that. Rachel is pursuing her doctorate in Education at the University of Central Florida where she’s also an adjunct professor working with Saudi Arabian students.

“I’m more involved now than I was for a while there even in New York,” Rachel says.

Where does this active spirit come from? Rachel grew up in the housing projects. Her dad died when she was young but he always stressed education. She remembers her mother, who raised five children, bringing her to the public library every day to do homework.

“We lived in the Bronx, where there were gangs and drugs and all that, but God took care of us,” Rachel says.

Now she takes part in the church choir at her Society location and leads a Spanish section. In her spare time, she also teaches English as a second language classes.

“I will never be rich in money, but I’m rich in everything else,” Rachel says.

Rachel is also extremely proud of her twin boys who grew up to serve in the military.

Bobbie Jo Gladding, a resident at Good Samaritan Society – Ambassador in New Hope, Minnesota, also spent much of her life in New York.

“I was raised in the Bronx and you can’t be a wuss in the Bronx. They’ll eat you up,” Bobbie Jo says.

If she sounds tough, it’s because she is. Bobbie Jo was one of a handful of female officers in the New York maximum security prison system.

A correctional officer for 23 years in all-male prisons including Sing Sing, she says she was assaulted numerous times leading to three reconstructive surgeries.

“I never let them get the best of me. I’ve been assaulted probably 20 times. A couple of them put me in the hospital,” Bobbie Jo says.

The 62-year-old has had her fair share of health challenges beyond that. She has multiple sclerosis and progressive multifocal leukoencephalopathy. PML is a disease of the white matter of the brain caused by a viral infection.

“I’ve been through it all and I refuse to give in. You have to have that inner fight,” Bobbie Jo says.

It’s a mantra she repeats to herself. It’s also how she raised her two boys who are her pride and joy.

Bobbie Jo spends a lot of time at the Society helping her neighbors by pushing wheelchairs among other acts of service.

If you walk by Esther Pagel’s room at Good Samaritan Society – Albert Lea in Minnesota, you’ll often find her listening to her radio and nibbling on some chocolate.

Straight-forward Hershey chocolate bars are pure bliss for the 96-year-old resident. When she’s not satisfying her sweet tooth, she’s chatting with one of her children. She has 12. You read that right, a dozen kids.

When asked how raising that many kids went, Esther replies, “Super! I wouldn’t part with them for anything in this world.”

She says it took all of her wit to manage the house.

“It entails everything. You’ve got to use psychology and you’ve got to make sure they know that you love them,” Esther says.

Finding what’s special about each and clinging to those attributes is key. She says everybody has their own unique intelligence.

Her advice for young parents today is simple.

“I don’t think it was that hard,” Esther says. “I made them all work. They had to work to eat.”

There you have it. Instilling a strong work ethic was one of her top priorities.

Working on projects for NASA sounds hard but not for Reta Beebe.

Reta works in planetary science and is an expert on Jupiter and Saturn. She’s worked on and is still plugging away on archive systems that help people access data from NASA missions including the Voyager program.

“I’ve now developed the access pages for the Juno mission which is in orbit around Jupiter. A really neat mission. I basically have been involved in work on the outer planets of the solar system,” Reta says.

Her experiments study and measure the clouds and winds of the giant planets. In 2010, NASA honored Reta with its Exceptional Public Service Medal. This past year she became a Legacy Fellow of the American Astronomical Society.

When asked what her favorite planet is to study, Reta replies, “I guess you would say it’s Jupiter. All of the weather is deeper embedded in the atmosphere of Saturn. So, you don’t see as much activity as you do on Jupiter. I’m quite fond of both of those planets,” Reta says.

A professor emeritus at New Mexico State University with a PhD in Astrophysics, she encourages all of her students to try and optimize their abilities.

Reta’s husband is a solar physicist. She says, as you might expect, the chatter at the dinner table usually involves astronomy each night.

Staying engaged with loved ones, friends and activities this past year has been a challenge. It’s been a little easier for residents at Las Cruces Village thanks to Christina Little.

“I’m actually doing a whole lot better than I thought I could,” Christina says.

During the pandemic, Christina started a newsletter for her location.

“I really saw that residents were less connected during the pandemic and it seemed to me that everybody needed to do whatever they could to help connect them,” Christina says.

She didn’t know how it would go but the stories she’s getting from her neighbors are impressive.

Christina says if someone sends a story, she and her husband edit it and then publish.

“One person worked for Marilyn Monroe. That’s pretty cool. People have met presidents, both of the United States and countries in Africa. I print what I get,” Christina says.

The 74-year-old has always been about sharing information. When she moved to town after finishing her master’s in Public Administration, she developed a database for social and community services known as the Interagency Council.

“A communication tool among social service providers. I have about 500 people on my listserv and I spread information about all kinds of things happening in the community,” Christina says.

The City of Las Cruces is a member and recently honored her with the Mayor’s Distinguished Award.

“I’m a connector. I’m somebody who connects all kinds of things happening in this community. There’s actually nothing quite like the interagency council anywhere else,” Christina says.

On top of bringing folks together, she’s been active on the local housing authority and as president of the New Mexico League of Women Voters.

“I care passionately about this idea of providing information to voters about election issues,” Christina says.

She praises the organization for its work on a diverse set of issues.

When it comes to women, Christina says, “We can vote. We can think. We are equal people. Sometimes better.”