McKenzie Hauptmann finds her niche as a CNA 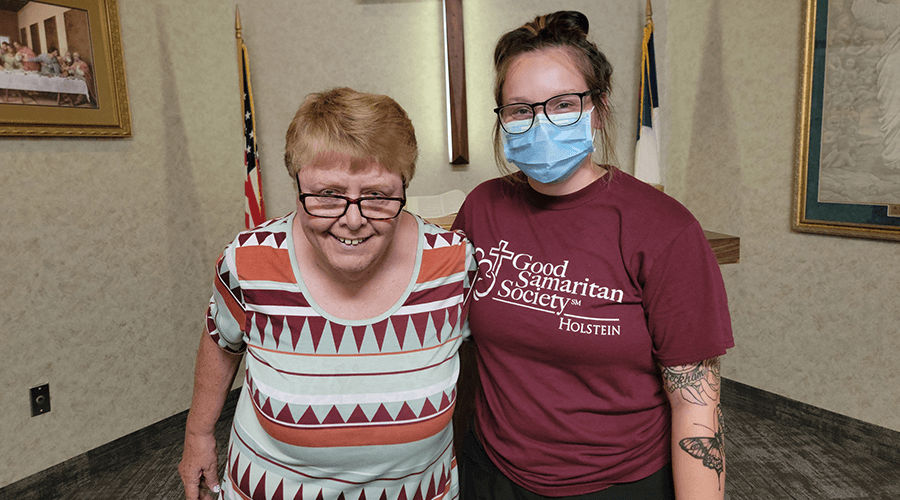 Certified nursing assistants like McKenzie Hauptmann hold a special place in the hearts of residents at the Good Samaritan Society.

McKenzie is one of thousands across the organization who have found their calling caring for seniors in a physically demanding role that requires vast amounts of empathy, kindness and energy.

“I like the fact I get to spend moments with them. I get to hear all their good stories,” says McKenzie. “They tell you about life and they teach you a lot.”

She first became a CNA in August of 2020 during the beginning months of the pandemic. She applied for the role at Good Samaritan Society – Holstein in Holstein, Iowa, because it allowed her the opportunity to provide hands-on care.

McKenzie was also following in her mom’s footsteps. Her mom was a CNA at the Holstein location several years earlier and worked there for over 10 years.

“I used to come to work with her and loved it,” McKenzie remembers. “I was there all the time and would help out in the laundry room.”

She works the morning shift and cares for 10 to 15 residents. Her job includes waking residents up and helping them get ready for their day. This includes assisting them with showering, putting on deodorant, brushing their teeth and getting dressed before taking them to the dining room for breakfast.

“Whether they’re an early riser or want to sleep in, we let them do what they want to do,” says McKenzie.

After breakfast, some residents take a short nap while others relax. McKenzie assists them with their hair and with shaving.

Then she makes sure residents get to the dining room for lunch. Afterward, residents have their choice in activities, whether it be relaxing, watching TV, visiting with others or taking part in a scheduled activity. She often paints residents’ fingernails or helps with bingo.

“We do a lot of fun activities – the circus, the zoo. It’s all special,” McKenzie says.

McKenzie has flourished in her role because she likes helping people and likes socializing.

“I think it just gives me more gratitude for what I have in life because you hear all these stories about what they’ve gone through. They teach you a lot,” she states.

McKenzie is thankful to work for an organization where her leaders encourage her to grow. She hopes to finish her medication aide coursework, and after having many conversations with her director of nursing, Shannon Stephenson, she’s considering going to nursing school.

“Good Samaritan has been very good to me,” says McKenzie. “My director of nursing is a rockstar.”

Shannon feels the same about McKenzie.

“McKenzie has the ‘Yes, we can’ approach and will jump in on anything asked without hesitation,” Shannon says. “She is devoted to the residents and the facility.”