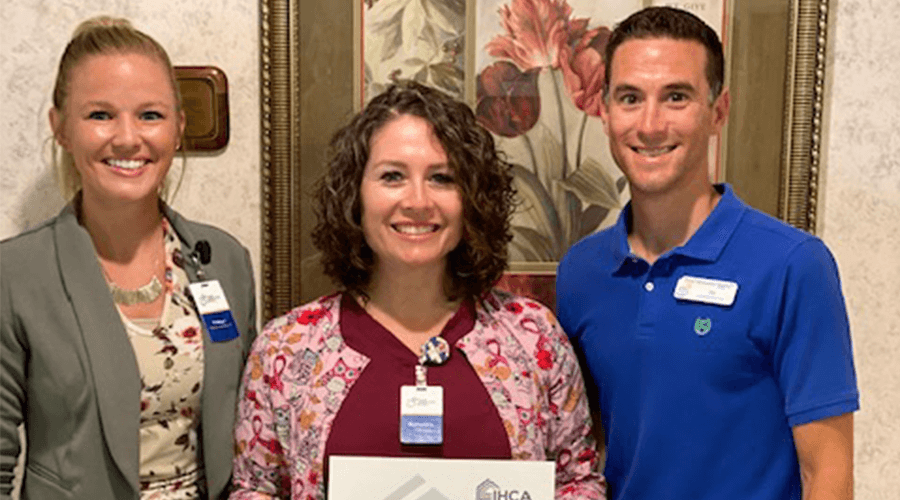 Ruthann Lallier knew as a teenager that she wanted to become a nurse, but her life took a detour. Years later, she’s pursuing her dream.

And it’s been helped along by a $6,000 scholarship she received from the Iowa Health Care Association.

Ruthann, a certified medication aide at Good Samaritan Society – Algona in Algona, Iowa, was encouraged to apply for the scholarship by Joe Bartolo, administrator at Algona, and Trisha Iversen, director of nursing. Several weeks later, she found out she was one of 11 recipients.

“I was absolutely elated,” says Ruthann. “It was amazing.”

Ruthann, who is now in her fourth year of school, takes classes at Iowa Lakes Community College – a 40-minute drive from her home. Most classes are in person, but some are online.

Although it’s been a challenge to work and go back to school, she’s grateful for the opportunity to further her education and use the skills she’s gaining to continue helping people.

“I’ve always wanted to take care of people. That’s my jam,” Ruthann says. “Everyone I take care of at Good Sam is my family. I feel privileged to be able to care for these people at such an intimate level.”

Joe notes that Ruthann has many qualities that make her a great caregiver.

“She’s very good with the residents,” he says. “She’s a leader who is competent and confident.”

Ruthann is also generous with her time and talents. When the center’s hairstylist wasn’t allowed to come into the building during the pandemic, Ruthann volunteered her own time to do residents’ hair.

“These women and men were used to having their hair done weekly,” says Ruthann. “I’m not a pro by any means, but I did everything I could to help them feel normal. I can’t tell you how many haircuts I gave and hair I curled and set.”

As she reflects on her life, she says being a nurse might not have been in her future. Ruthann married young and was in an abusive marriage where she says her only focus was having children and surviving. When her oldest child was 11, her husband left, and Ruthann had four children to support.

“I picked up the pieces and started to build a life for us,” she says.

She eventually moved to Algona, began working in an insurance agency and met the man who is now her husband. After her job was eliminated, she had a decision to make.

“I was left with ‘Now what?’ This time I had a husband who was supportive,” says Ruthann.

“I always wanted to do it. It just took me a long time to get here,” Ruthann says.

Her home life is busy as a wife, mother of four and stepmother of two. But she’s determined to pursue her calling of being a nurse and looks forward to continuing to work at the Algona center after she graduates.