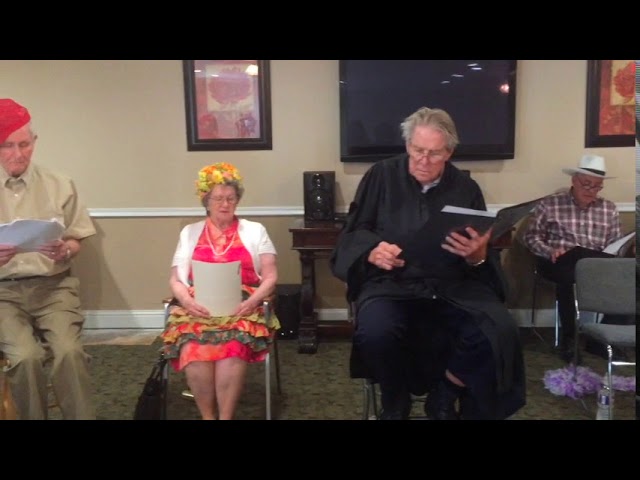 How theater came to Lake Forest Village ... and how you can help it thrive

Denton, Texas – There just aren’t many scripts written for senior actors and actresses. So Freda and James Parker stepped in to create them. The journey eventually led them to an unexpected place: Good Samaritan – Lake Forest Village.

As residents of the senior living community, they’ve had the opportunity to share their productions with others. It’s an example of the kinds of creative opportunities that donors could support when they make a gift to the Society on North Texas Giving Day, Sept. 17, 2020.

When Freda retired in 2004, she and James started a drama group, the Stage Hams, at the local senior center. They quickly discovered there were few plays written for their type of company, so Freda wrote her own. It was entitled “How the Dotes Got in Big Trouble, but Were Saved.”

The Stage Hams toured area retirement communities with their productions, which gave the Parkers a chance to see the living options first hand.

“Lake Forest Village was the only one that really showed a sense of community,” Freda said. “People gathered and actually talked.”

When the time came for a move, Lake Forest Village seemed like a natural choice.

How a scheduling quirk led to a career

Freda is a lifelong writer. It all started in the 1960s, when she attended a creative writing class in California.

“If you can believe it, back then community college was $5 a class,” she said. “I wanted a child psychology class, but it was full.” She turned to the only open class: creative writing.

Freda said this “opened a door to the world of writing.” She turned the chance opportunity into a career, working for several local publications and starting her own resume-writing business.

Even in retirement, writing found Freda and not the other way around.

“I always thought I would be doing something with theater, but never thought it would be writing,” she said.

The Parkers have created and produced two original plays at Lake Forest Village and showcased many others that Freda has written over the years. James has pursued his woodworking and gardening passions in addition to working with the Lake Forest Village theater group.

How you can make a difference

“You can provide the margin of excellence so that the Society can expand offerings like this,” Wells said. “Well-being is about so much more than physical wellness. It’s about wellness of body, mind and spirit, and we believe programming like this fits very well with that outcome.”

You can give online to support programs for residents at Good Samaritan – Lake Forest Village or Denton Village. Be sure to follow our Facebook event page for North Texas Giving Day so you don’t miss any of these stories!