A special quilt, 20 years in the making 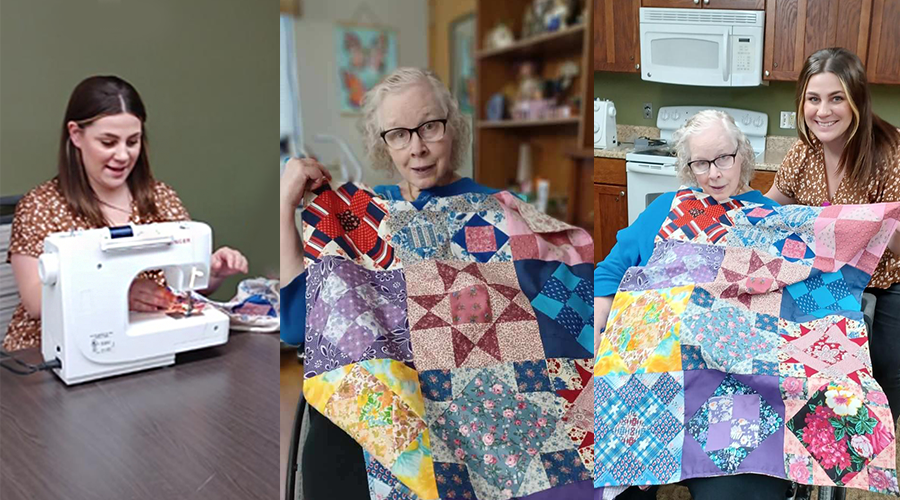 Linda Mack didn’t know if she’d ever complete the quilt that her great-grandmother started decades ago.

After a stroke in 2018 left her entire left side paralyzed, Linda was unable to sew or do needlework anymore. She moved to Good Samaritan Society – Manson in Manson, Iowa, that same year and began pursuing other hobbies and craft projects.

But the quilt was still on her mind.

Then she met Cassie Darr, who became the activity director at the center in September 2020, and the two bonded over their love of sewing.

One day, Linda mentioned the quilt to Cassie and how she wished she had been able to finish it.

The project was special to Linda because it contained pieces of clothing that she, her mother, her grandmother and her great-grandmother had worn.

Knowing how much the quilt meant to Linda, Cassie offered to help.

Together they were able to finish it – with Linda taking care of the pinning and Cassie doing most of the sewing.

“It felt great to have it done because I had a piece of my memories back,” says Linda.

The final result is a colorful, cozy lap robe. Cassie was happy to see it bringing Linda joy.

“This was Linda’s first time experiencing anything like sewing and needlework since she had her stroke,” Cassie said.

A love of sewing

Because the love of sewing and quilting runs deep in Linda’s family, the quilt project reignited her passion for the craft – despite her physical limitations.

Linda’s great-grandmother was a skilled quilter who always had many projects in the works. When she died, she left several unfinished ones – including the aforementioned quilt – to Linda’s grandmother.

This same grandmother taught Linda how to sew and crochet. Linda has fond memories of making patterns and sewing clothing with her.

“She made me practice on Barbie doll clothes. I used to love to crochet them,” says Linda.

In high school, Linda sewed her own prom dress. She later worked for 13 years as a seamstress in a shop in Fort Dodge, Iowa.

“I liked having a special skill and being able to do things no one else could,” says Linda.

When Linda married her husband, Myron, they had two daughters and she was happy to sew clothing for her girls and crochet in her spare time.

Linda has since taught her children and granddaughter how to sew and crochet.

Although Linda has full mobility in her right arm, it can still be difficult to cut fabric without the help of her left arm. Still, she hopes to continue working on sewing projects with Cassie’s help.

Linda appreciates Cassie and the other friendly staff members at the center.

And Cassie likes that she gets to come to work every day and have fun with the residents.

“If she gets too bored, I come in,” says Linda with a chuckle.

Linda and Cassie hope to start a sewing group at the center to make dresses, blankets and other items to donate.