Continuing to learn and grow in her 90s 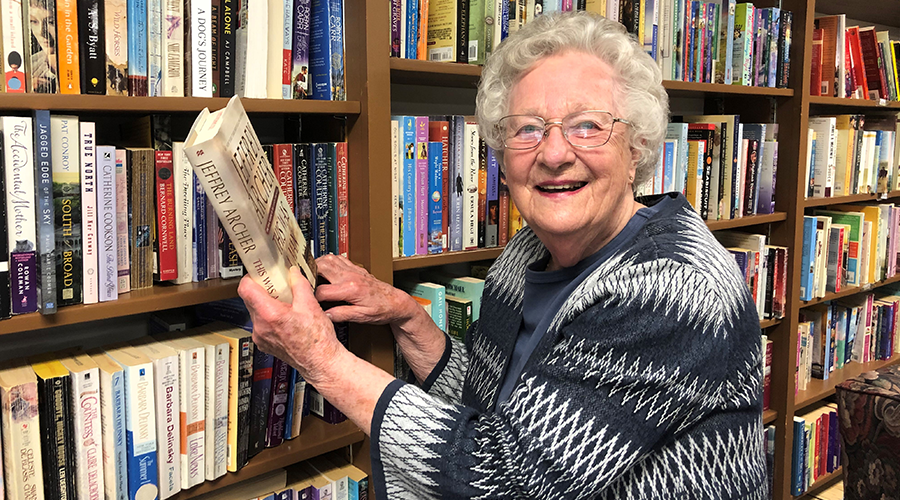 Most days Winifred Dixon can be found at the computer in her apartment researching her genealogy. The 93-year-old resident at Good Samaritan Society – Moscow Village in Moscow, Idaho, enjoys locating family members from centuries past.

“It’s been a fun adventure. My mother’s family came from Ireland. The potato famine meant their tenants couldn’t pay their rent,” says Winifred. “My father’s family came to Virginia in the 1600s. I’m Irish and English.”

Winifred likes using her computer to trace her genealogy and also uses it to balance her checkbook. She recently got a smartphone to text her family. And she uses Zoom to talk with her son and his family once a week. She’s thankful for a friend who helps her with any computer issues she has.

Winifred grew up in a small community outside of Portland, Oregon. From there, she went to Oregon State.

“That’s where I met my husband,” she says. “I typed my husband’s term papers. I teased him that was the reason he married me because I could type and spell.”

The couple moved to Fort Collins, Colorado, where he taught at Colorado A&M. Then they moved to Moscow so he could pursue his master’s degree while working full time.

“It was a wonderful place to rear our two children,” states Winifred.

Although the Dixons liked living in Moscow, Idaho, they wanted to explore the world, too. They left several times and came back again.

One stint was in India for two years. While they lived there, their son went to school in Geneva, Switzerland, while Winifred tutored their daughter at home for a year before she went to an international school in New Delhi.

The family also lived in Kenya.

“We had a year there and I loved it,” says Winifred. “We lived close to a park. On the weekends, we’d go there and watch the animals wander by.”

They eventually returned to Moscow where both she and her husband worked at the University of Idaho and retired from there.

Winifred and her husband were married for 63 years. When he died in 2010, she decided she didn’t want to live in a large house by herself. That led her to Good Samaritan Society – Moscow Village.

Besides tracing her genealogy, Winifred, who has degrees in library science, English and history, spends a lot of time reading. She mainly likes biographies, political books and mysteries.

“We have quite a nice library here at Good Sam and I helped work to keep things in order,” she says.

The library is filled with books that were donated and has a collection of large-print books.

When she’s not reading or researching genealogy, Winifred spends one day a week playing bridge. The pandemic meant games in the community room were on hold, but now they’ve resumed.

Several members of the bridge group have passed away, so Winifred hopes they’ll find new players to join in.

She likes being active and is interested in joining a book club that may start on campus.

“They do lots of things to keep us happy,” Winifred states. “We had a continental breakfast the other day that was fun.”

In addition to indoor activities, Winifred spends a lot of time outside walking the beautiful campus. She likes the paved path around the creek.

She also likes the wellness center on campus and stays healthy and active by taking part in the fit and fall class, which has a helpful and experienced instructor.

At home at Moscow Village

When Winifred moved to Moscow Village, she purchased a twin home. It served her well for over a decade. She enjoyed her neighbors and playing bridge with them.

After moving to a two-bedroom apartment on campus recently, she likes the choices she has there.

For now, Winifred is content in her apartment and likes having access to transportation through the campus van.

I can’t say enough about how wonderful the staff is,” she states. “They are very caring and helpful.”