Eugene Village offers a haven for the homeless 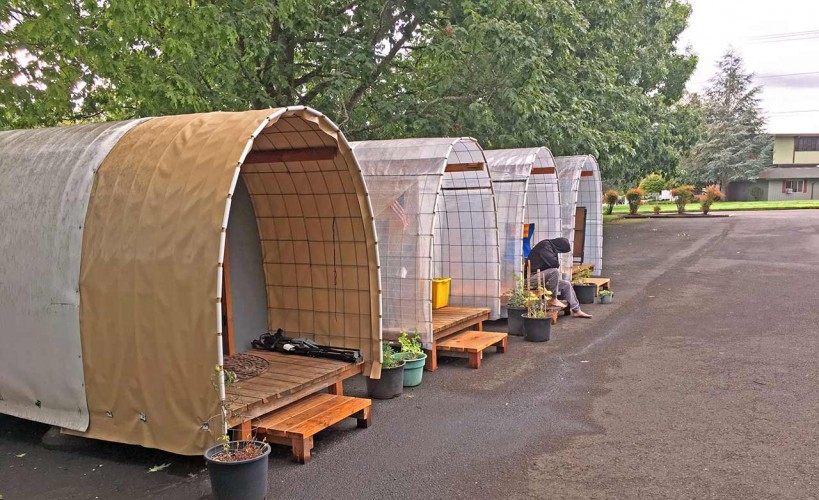 These shelters — called Conestoga Huts — are a part of a city-authorized program designed to offer respite to the homeless population of Eugene, Oregon.

This is a no-brainer for us as it fits our mission of providing shelter and supportive services to older persons and others in need." – Steve Chadick, former administrator of Eugene Village

The huts take up about half of the Eugene Village parking lot. Officials from the city, Lane County and Eugene Village agreed it would be an ideal spot for a homeless camp and, together, started the project. In two years, the camp has grown from seven to 16 shelters with four more being added.

Eugene, and Lane County in general, has a homeless crisis. The homeless occasionally spill over into neighborhoods, causing issues. But a dedicated area of shelter with regulations helps alleviate problems between the homeless and homeowners.

Thanks to the city's lenient overnight sleeping ordinance for parking lots, Eugene has been able to place homeless camps in unexpected locations. In this case, the huts legally sit on the northeast corner of the parking lot.

There are rules to keep order at the camp, including no drugs or alcohol, quiet time, and specified hours to be on and off site. Each resident also must have a plan in place for progressing toward permanent housing.

“They’re being provided a shelter for up to six months to try and get back on their feet,” says administrator Matthew Trammel. “If we didn’t have these camps, they would be out in the street sleeping on benches.”

Each hut features a bed, insulation, a small closet and a lockable door. As required by city code, the site has a fence surrounding the designated area, along with portable toilets and trash service.

The group of huts, named Samaritan Village Homeless Camp, has been a successful endeavor in the two years it’s called Eugene Village’s parking lot home. The center received a Good Samaritan Society Social Accountability Grant to help fund construction for part of the huts, and employees are donating to the effort as well.

The community approach to solving homelessness is “absolutely something others could do and replicate our homeless camp,” says Trammel.

The program is a partnership among the Good Samaritan Society, Nightingale Health Sanctuary and Community Supported Shelters.

Serve another in need by providing shelter and safety