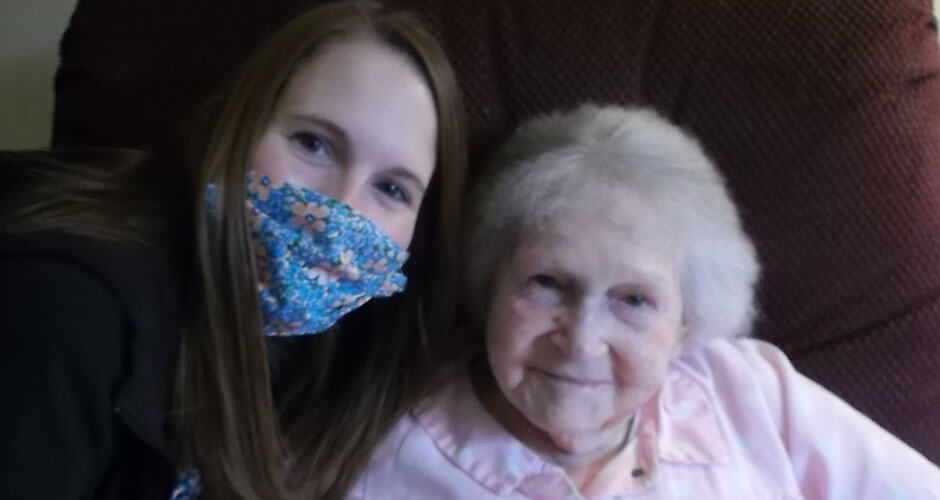 For Cheyenne Raines and Eddie Caplinger, helping others is at the heart of their lives. And because of their dedicated service to seniors, they are being recognized as health care heroes.

Both work at Pendleton Manor in Franklin, West Virginia, where they’re helping residents find meaning and purpose in a close-knit community.

Joking with residents and making them laugh is something that comes easily to Cheyenne Raines. Co-workers say she is bright, cheerful and easy to work with.

Cheyenne began working at Pendleton Manor in August 2018. She originally planned on becoming a nurse, but fell in love with long-term care after becoming an activity assistant.

She develops relationships with residents during daily one-to-one visits. She also helps with hallway activities, such as bingo, devotion time and church services.

Cheyenne says the residents are what she likes best about working at Pendleton Manor.

“My favorite thing is that you get to know them personally,” she says. “You get to learn about their younger days and their family and their children and all of the things that make them the people they are today.”

One of the things she’s happy to do as she visits residents is bring them joy when they’re feeling down.

“Even when they’re having a hard day, I can brighten it up a little bit and get them out of their funk, especially now with the pandemic,” Cheyenne says.

Cheyenne also helps the certified nursing assistants (CNAs) by delivering food trays, answering call lights, or communicating what a resident may need. Cheyenne’s co-workers know she is always willing to help out.

When she’s not working at Pendleton Manor, Cheyenne serves as an emergency medical technician (EMT) for the Pendleton Rescue Squad; something she’s done since her senior year in high school. She’s also a mom to a young son. She’s lived in the Franklin area her entire life and hopes to continue working in activities for many years to come.

“I want to be able to help people. I feel like that’s my way of giving back,” she says.

Eddie Caplinger found himself in the right place at the right time when a maintenance position opened up at Pendleton Manor. He had recently been laid off from his job as an electrician and was looking for something closer to home.

When he attended a sportsman’s dinner at a local church, he ran into a man who had retired from the maintenance team at Pendleton Manor. The man encouraged Eddie to apply for his position and the rest is history. Eddie started there on April 13, 2011.

Since that time, he’s been a dedicated employee who helps all aspects of the building run smoothly.

Eddie’s co-workers say he deserved to be recognized because he answers the phone any time of the day and always responds to questions or concerns from the nursing staff.

Eddie’s job involves everyday maintenance and includes a lot of problem-solving. He also helps oversee a construction project taking place at Pendleton Manor. He was recently promoted to director of environmental services, which involves supervising a small team of part-time employees.

When asked what moments stand out in his work, he says it’s the times when someone needs help with something that’s broken.

“Sometimes, it’s as simple as plugging something in or flipping a switch,” Eddie laughs. Whatever he’s working on, he says he likes to have fun.

During the pandemic, Eddie says life at Pendleton Manor has been a little more difficult, but he uses his problem-solving skills to help residents and staff members.

His co-workers say he is efficient, hardworking and dedicated. He has been known to come into the nursing home to answer a call after working all day and then come back to work with a positive attitude and a smile on his face.

Eddie has been an EMT for 10 years and a firefighter for 26 years. He serves on the Franklin Volunteer Fire Department and Pendleton County Emergency Rescue. If a call comes in during the day, he’s able to respond and make up his time at work.

“My dad and mom both volunteered. My dad was a career firefighter and my mom was an EMT for several years. I grew up with it, so it seemed fitting,” he says.

Eddie is married and has three children and feels fortunate to work close to home.

Whatever a day brings at Pendleton Manor, Eddie says, “It’s my job to make sure things are going smoothly here.”