Thanks to help from co-workers, Kelly Todd received the gift of sight 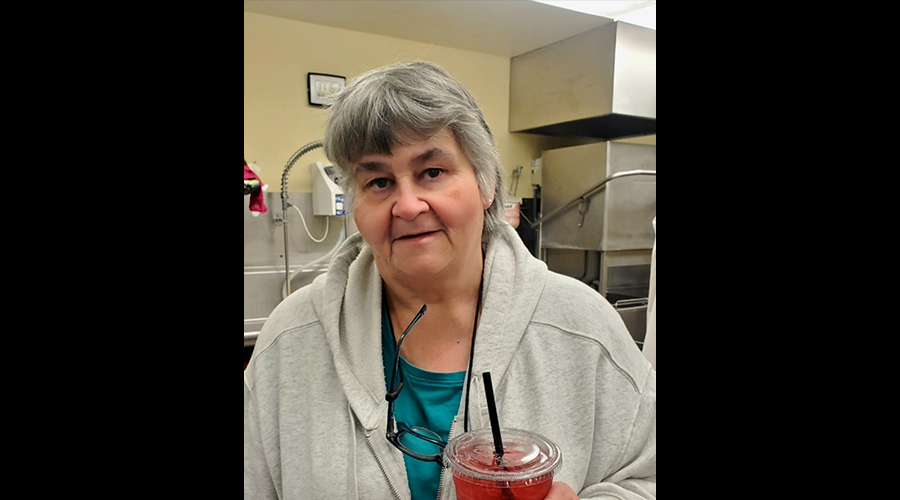 As a cook, Kelly Todd relies on good vision to help her read recipes and meal plans for each resident at Good Samaritan Society – Stafholt in Blaine, Washington.

Nine years ago, her eyesight began deteriorating rapidly. Within six months, it got to a point where she wasn’t able to read or drive. When she looked at the faces of her loved ones, co-workers and residents, it was like looking through wax paper.

“I went to the doctor and he said, ‘You can’t work because you can’t see.’ I was terrified because each resident has their own menu that you have to read. Well, I couldn’t, so the dietary aid, Grace Eberle, would call out what I needed to do,” says Kelly. “The funny thing is she still does it today.”

Kelly, who was 48 years old at the time, needed to have cataract surgery on both eyes, but the costly procedure didn’t fit into her family’s budget.

So, she got rides to and from work from her husband and co-workers, which took extra dedication since she has a 25-minute commute to work. Meanwhile, the leadership team at Stafholt brainstormed how to help her.

When leaders at the Good Samaritan Society’s National Campus heard about Kelly’s situation, they wanted to help. They said they would pay for one of the eye surgeries if the Stafholt team could collect enough donations for the other one.

The team raised $2,500 to help their long-time co-worker and National Campus donated the matching amount. Kelly’s co-workers also contacted a doctor in Bellingham, Washington, who was willing to perform the surgery at the Medicare rate. The following week, Kelly had surgery on one eye and a month later had surgery on the other eye.

“I was blown away because I was able to get it done. I don’t know where I would be today if the staff and the Good Samaritan Society hadn’t stepped in and helped me,” Kelly says.

The results were almost immediate.

“They took me back to recovery and my daughter was there and I could see her!”

“Then I was good to go,” states Kelly. “I can’t read without readers so I have them strapped to me. I’m forever reading recipes and diet orders.”

Kelly is thankful her eyesight was restored so she could continue working. She likes the feeling of family she has with her co-workers in the Stafholt kitchen.

“We’re such a close-knit group. Everybody works together really well,” she says. “If someone needs help, we all step in and help one another. It’s been a really fun experience working with these people.”

Kelly's shift begins at 5 a.m. The kitchen team includes herself, a dietary aid and a dish washer. The evening cook comes in at 1 p.m.

Kelly began working at Stafholt on April 16, 2003. She previously worked for seven years at a hotel before being laid off. She and her husband had young children and the family needed her income so she walked into Stafholt and filled out an application.

She was hired to work in housekeeping part-time on call.

“The funny thing is, I was never part-time or on call,” Kelly remembers. “I worked in housekeeping for four months and they asked if I wanted to come into the kitchen and be a dietary aid. I’ve stayed in the kitchen that whole time. I’m now the senior cook.”

Kelly says the best part about her job is the residents. She has many memories of the residents she’s served, including her father-in-law and a family friend. One resident has lived at Stafholt since Kelly began working there.

“They talk to you in the morning when you come to get coffee and you get to hear their stories,” she states.

One of the special things she does for residents is bring in cookie dough for them to roll out, bake and then frost.

“Sometimes the residents have special requests and I go out of my way to make sure they have what they want or need,” Kelly says. “I believe that my calling was to be a caregiver and I'm doing God's work. And it warms my heart to know that I’m a part of helping their lives to be better while they are here on this Earth.”