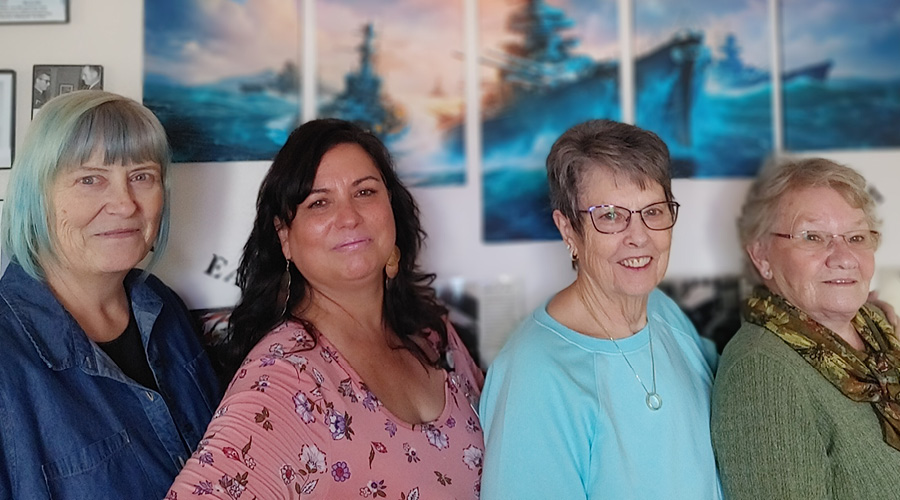 A wall of photos paying tribute to veterans sits prominently in the community center at Good Samaritan Society – Spokane Valley, all thanks to the generosity and dedication of a group of women who live on campus.

“It all started with a flag,” says Claudia Ouwerkerk, lead administrative aide at the location. “A resident brought me one that belonged to her father and asked if I might be able to use it on campus.” 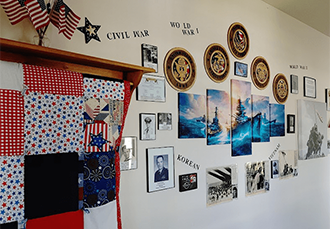 The flag sat in Claudia’s office for some time. But it eventually led to discussions with Marie Estes, a twin home resident, about how they could honor veterans. The women knew they wanted to do something, but didn’t know what.

In the meantime, Marie and her friends, Sharon Johnson and Linda Rockhold, also twin home residents on campus, were brainstorming ideas for how to make the community center’s walkway more interesting. That’s when the idea for a military wall came to life.

The women talked to Claudia about their idea and got permission to move forward.

Veterans were pleased when they found out about the project and they began donating photos. Marie shopped for frames and helped Sharon and Linda hang up the photos and other items.

When fellow resident Arlene Koth walked by and saw the group decorating the wall, she wanted to help. She offered to pay for all the picture frames and the military branch emblem decorations.

The group worked throughout the summer putting the wall together. It also includes a patriotic quilt made by resident Elaine Hunter.

“We moved things around several times so we could get the right look,” says Marie. “It was special to see all the many hands that went into it.”

Now that the wall is complete, many residents, family members and other visitors have come to enjoy it.

“It turned out beautiful and we’re really happy with it,” says Marie. 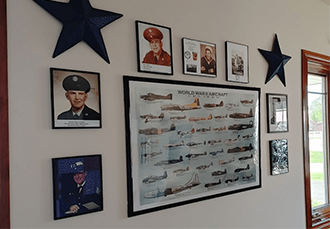 The wall honors past and present residents of the Spokane Valley campus and their spouses. About 20 veterans are featured, including the location’s administrator – John Gannon. Each photo display includes a veteran’s name, rank, branch and a short paragraph about their military service.

Many of the veterans on campus served in World War II, so the wall includes history of that conflict and several other patriotic decorations and sayings.

Marie, Sharon and Linda plan to add more to the wall in the future.

Claudia is thankful for the women’s volunteerism and grateful there is now an area that recognizes veterans.

“It was quite an honor for us to do this and depict the fragility of life and also the heroes that live among us,” says Claudia.