Rehab therapy: The goal is to get you home [video] 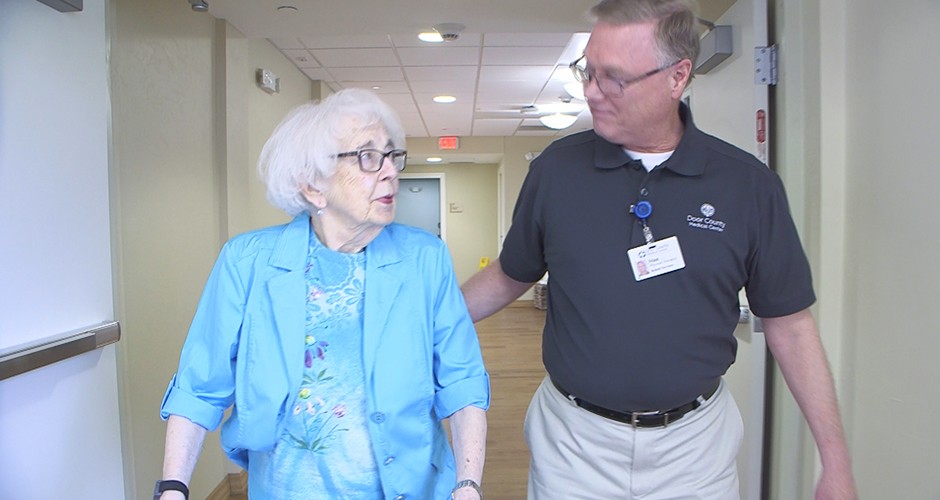 Watch the video above to see how the Good Samaritan Society helped Barbara Larsen get her health back on track after an illness.

Barbara Larsen found all three in one place when her health started to decline.

First, it was trouble with sleep apnea that robbed her of her strength. She went on oxygen, and that seemed to help.

Everybody is very supportive and positive. They know what they're doing." – Barbara Larsen, Good Samaritan Society – Scandia Village resident

It wasn't long, though, before she noticed she was still in a downward slide.

“I was losing my physical ability,” she says. “I was sent to the hospital and they found I had pneumonia. They just kept me a week and then sent me back to the care center.”

During her recovery, Barbara was cared for by the therapy team in Scandia Village’s new state-of-the-art rehabilitation building.

Once she had healed, it was just a short trip down the hall to her Meadows senior living apartment.

“I was really happy," Barbara says.

"I had a place to come back to that I knew.”

Physical therapist Stan Smith and his team were ready for Barbara when she arrived.

Stan says Barbara is a classic example of many residents they see coming back from a hospital stay.

“They’re weaker due to not being very mobile in the hospital,” he says.

“The longer they stay (hospitalized), the worse that weakness gets.”

Not sure what kind of therapy you need?

The first step for Stan was to evaluate Barbara. Would she be able to navigate a homelike setting?

Once he knew what Barbara could do, it was time to get her back in a walking routine similar to where she was before she was hospitalized. “We’ll do a lot of walking in the hallway,” Stan says. “We’ll go into the dining room. We’ll set up a lunch scenario trying to get her back into her old habits.”

Barbara and her husband, George, had always said that when it was time to retire, Scandia Village was where they wanted to live.

George was growing weaker due to a battle with polio earlier in his life.

“He got into the care center,” Barbara says of their move to Scandia Village. “And I walked right over to the Meadows and said, ‘Do you have an apartment for me?’” Because they had gotten on a waiting list a few years earlier, the answer was “yes.”

George died a few weeks after the couple moved to Scandia Village. For Barbara, losing her husband was hard enough. It was a comfort not having to think about things like mowing the lawn and shoveling snow.

“It's a nice place to be, and you don't have the worries that you have as a homeowner,” she says.

Back on the right track

Barbara’s health has improved so much that she’s now started looking for new challenges, including adding some of the exercise classes at Scandia Village to her schedule. “Everybody is very supportive and positive," she says. "They know what they're doing.”

Recovery isn't always easy and often requires a lot of encouragement, but once a client starts to turn the corner and begin recovery, Stan says it’s rewarding to see the change. “The goal from day one with our team is to get that person back to independent living.”