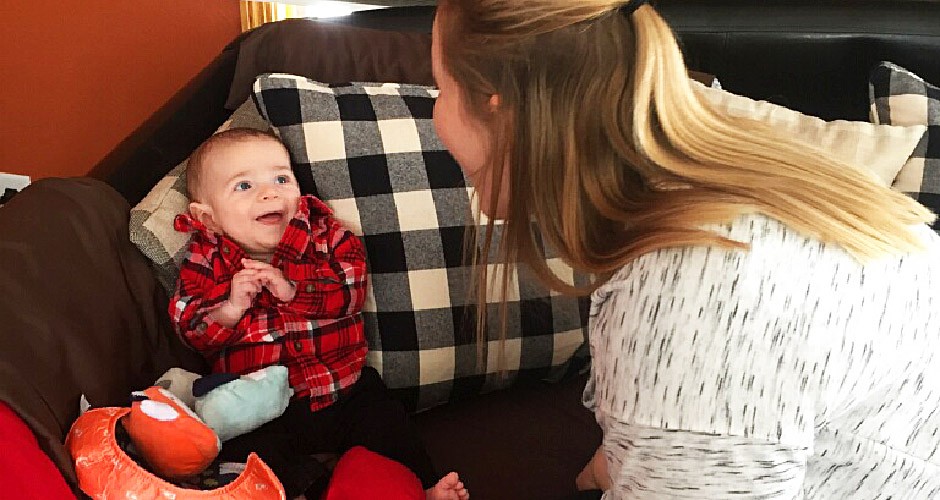 Becoming parents can be a stressful and anxious time. For new parents Stephanie Kuehn and Brad Gardner, this was especially true on the day their son, Murphy, was born.

Shortly after he was born, Murphy was flown from Sanford Birth Center in Bismarck, North Dakota, to the University of Minnesota Masonic Children’s Hospital in Minneapolis, Minnesota, where he underwent what would become a three-part procedure. The first procedure was a sutureless repair to correct the flow, which was completed the day after he was born. This required his chest to remain open while the swelling went down and required a bridge to be placed to allow for this to happen. The second procedure was the bridge removal, which took place two days after the first surgery. Three days after the initial repair, the third part of the surgery was the chest closure. One month later, Murphy had a gastrostomy tube (G-tube) inserted to help him get the nutrition he needed.

Murphy was finally discharged from the hospital when he was 5 weeks old and admitted to Good Samaritan Society – Home Care in Bismarck, North Dakota, 11 days later. That’s when home health RN case manager LaToya Buzalsky met Murphy and his parents.

“At first, Murphy was a frail, seven-pound baby and was unable to breastfeed," says LaToya. "He was, however, a happy baby and was cooing the first day we met. We became buddies right away."

Over the next few months, LaToya helped the family adjust to caring for Murphy. She checked to make sure the incision from surgery was healing properly and provided care with tube feedings, as well as many other tasks.

When working with a sick baby, there are some setbacks. During that time, LaToya picked me up, dusted me off and sent me back into the game.” — Stephanie Kuehn, baby Murphy's mother

LaToya also provided the emotional support the family needed. With Brad having to return to work after two weeks of being home, this was especially crucial for Stephanie.

“LaToya was amazing," says Stephanie. "She was kind, knowledgeable and great with Murphy. She fulfilled the role of a nurse to Murphy and also extended her kindness to us. She helped me through tough days as well. When working with a sick baby, there are some setbacks. During that time, LaToya picked me up, dusted me off and sent me back into the game.”

With each passing day, Murphy began to look better and grow stronger. He was eventually able to graduate from bottle feeding to breastfeeding. He started gaining weight and even began developing cute baby rolls. When he was 15 weeks old, Murphy was discharged from home care.

“He was my little rock star,” says LaToya. “It was hard, knowing I wouldn’t visit Murphy every week, but seeing him grow stronger each day was amazing.”

The family kept in touch with LaToya after Murphy was discharged, and Stephanie said she went from feeling like she could never leave the home to being able to bring Murphy with her to her full-time job. Murphy continues to make gains and grow stronger, all while smiling throughout the day. The focus now is on reintroducing the bottle and then removing the G-tube, hopefully within the coming months.

“We are extremely happy with the care and support LaToya provided," says Stephanie. "It was just phenomenal."

Home health from the Good Samaritan Society can help clients of any age receive the care they need after an illness, surgery or hospitalization.